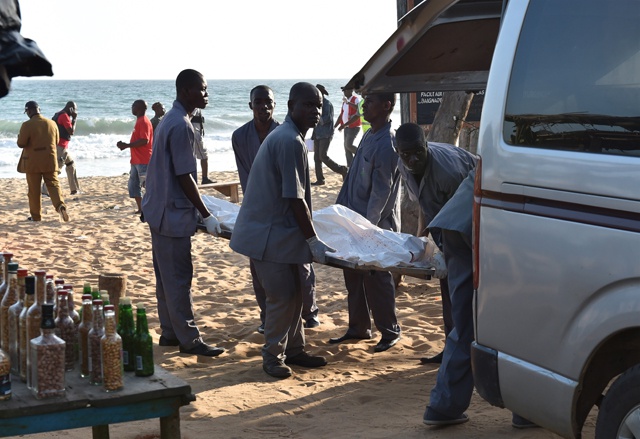 Employees load a body into a van after heavily-armed gunmen opened fire in the Ivory Coast resort town of Grand-Bassam, leaving bodies strewn on the beach, killing at least five people. (SIA KAMBOU/AFP)

(AFP) - Gunmen killed 16 people at an Ivory Coast resort Sunday leaving bodies strewn on the beach, in an attack claimed by an Al-Qaeda affiliate as fears grow of a mounting jihadist threat in west Africa.

Armed with grenades and assault riffles, the attackers stormed three hotels in the sleepy resort of Grand-Bassam, popular with expats, around 40 kilometres (25 miles) east of the commercial hub Abidjan.

Witnesses described panic as the gunmen sprayed bullets across the beach, and one told AFP they heard an assailant shouting "Allahu Akbar" -- Arabic for "God is greatest".

"I saw one of the attackers from far away," says Abbas El-Roz, a Lebanese salesman, who was in the pool of a hotel when the attackers struck. "He had a Kalashnikov and a grenade belt. He was looking for people."

Fourteen civilians and two special forces troops were killed in the shooting spree, along with six assailants, according to Ivory Coast's President Alassane Ouattara.

"The toll is heavy," he said as he arrived in Grand-Bassam, describing the killings as a "terrorist" attack.

One French and one German national were among the dead, according to Interior Minister Hamed Bakayoko.

The US and former colonial master France offered offered to help the Ivorian government find the perpetrators, with French President Francois Hollande condemning the "cowardly attack".

AQIM said in a statement three of its fighters had been killed.

West African nations have scrambled to boost security in the wake of jihadist attacks on tourist hotspots in the capitals of Mali and Burkina Faso, which were also claimed by the group.

The assailants, who were "heavily armed and wearing balaclavas, fired at guests at the L'Etoile du Sud, a large hotel which was full of expats in the current heatwave," a witness told AFP.

Inside the hotel, an AFP journalist saw a bullet lodged in the glass front of the bar's refrigerator and a large pool of blood on the floor.

Carine Boa, a Belgian-Ivorian national who teaches at an international high school in Abidjan, was at one of the beach bars with her two sons when the gunmen arrived

"We were really scared. We thought of the people at the Bataclan," she said, referring to the concert venue attacked by gunmen during the November's terror attacks in the French capital when 130 people were killed.

"I thought this was it for us. You always tell yourselves that these things can't happen."

The army was tightly controlling access to the area after the attack, and an AFP journalist saw around a dozen people, including an injured Western woman, being evacuated in a military truck.

French Foreign Minister Jean-Marc Ayrault and Interior Minister Bernard Cazeneuve will travel to Abidjan on Tuesday in a show of solidarity with the country, an official in Paris said.

In the French capital, prosecutors opened an inquiry into the assault, while France's embassy in Ivory Coast told its nationals to stay away from the area "to avoid obstructing security forces".

Fears have been growing of terrorist attacks and the recently concluded Flintlock military exercise, grouping African, US and European troops, focused on the need to counter jihadism in the region.

Gunmen killed 30 people in Burkina Faso's capital Ouagadougou in January, while an attack in Mali the previous November left 20 dead. AQIM claimed both attacks, which both targeted hotels popular with foreigners.

Sunday's attack comes as a blow to Ivory Coast's tourism sector, which the government is seeking to boost as the country emerges from a decade of political crisis.

Ouattara was re-elected for a second presidential term late last year, hoping to turn the page on the violence and revive Ivory Coast's conflict-scarred economy.

Former president Laurent Gbagbo is currently on trial at the International Criminal Court for crimes against humanity over deadly violence that followed the disputed 2010 election that brought Ouattara to power.

More than 3,000 people were killed in five months of unrest after the presidential polls, when Gbagbo refused to concede defeat.