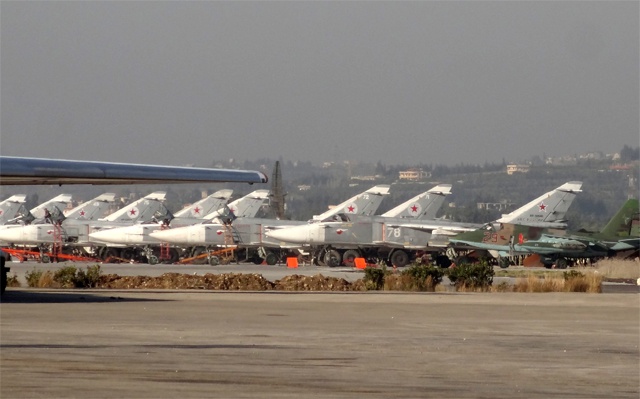 This file photo taken on February 16, 2016 shows a general view shows Russian fighter jets on the tarmac at the Russian Hmeimim military base in Latakia province, in the northwest of Syria. (AFP)

(AFP) - Moscow will begin withdrawing its forces from Syria on Tuesday, ending its controversial bombing campaign, as a new round of UN-backed peace talks seek to end the conflict now in its sixth year.

Russian President Vladimir Putin called long-standing ally Bashar al-Assad on Monday to inform him that Moscow will pull out the bulk of its forces from Syria, a move hailed by the United Nations Security Council as a "positive step" for the fraught peace negotiations.

But hopes for a breakthrough at the Geneva talks remained remote with both sides locked in a bitter dispute over the future of the Syrian president.

"The task that was set before our defence ministry and armed forces has as a whole been completed and so I order the defence ministry to from tomorrow (Tuesday) start the withdrawal of the main part of our military contingents from the Syrian Arab Republic," Putin told Defence Minister Sergei Shoigu in televised comments.

The withdrawal of the Russian troops -- which began airstrikes in support of the regime in September, sparking condemnation from Western powers -- is expected to put more pressure on Assad to negotiate during the Geneva talks.

As the meeting enters its second day, UN envoy Staffan de Mistura was expected to hold his first official meeting with the Syrian opposition High Negotiations Committee (HNC), who have repeatedly said that Assad could not be part of Syria's political future.

The Russian ambassador to the United Nations Vitaly Churkin and German Foreign Minister Frank-Walter Steinmeier also said the Kremlin's move would boost chances of a diplomatic solution to the conflict that has killed more than 270,000 people and displaced millions.

The White House said President Barack Obama had spoken to Putin following Russia's surprise withdrawal announcement, and discussed the "next steps required to fully implement the cessation of hostilities".

But US officials offered a more cautious initial assessment of the Kremlin's decision.

"At this point, we are going to see how things play out over the next few days," a senior administration official told AFP.

Russia began its airstrikes in support of Assad's forces in September, a move that helped shore up the regime's crumbling forces and allow them to go on the offensive.

Russia sent more than 50 warplanes to carry out thousands of strikes across Syria arguing that it was targeting "terrorist" groups including Islamic State jihadists.

The intervention was slammed by the West and its regional allies, who insisted that Moscow was mainly bombing more moderate rebels fighting Assad.

A temporary ceasefire between Assad's forces and opponents in the country introduced on February 27 has largely held, but it does not cover the IS and Nusra front groups.

Kremlin spokesman Dmitry Peskov told journalists that Moscow's Hmeimim air base in Syria and its Tartus naval facility would remain functioning and that some military contingents would stay behind.

He did not however give any details on how many soldiers would stay in Syria and what the timeframe for withdrawal was.

Syria's main opposition welcomed the Kremlin's withdrawal announcement, but said it would wait and see what impact the order would have on the ground.

"We must verify the nature of this decision and its meaning," Salem al-Meslet, spokesman for the opposition HNC, told reporters in Geneva.

Hopes for a breakthrough at the talks, however, remained remote with Assad's future still a major sticking point.

As the Syrian delegations arrived in Geneva over the weekend, Damascus warned that any discussion about removing Assad would be a "red line".

After his first official meeting with the regime on Monday, UN envoy de Mistura told reporters that "strong statements (and) rhetoric" were part of every tough negotiation and that his initial discussions with government representative Bashar al-Jaafari were "useful".