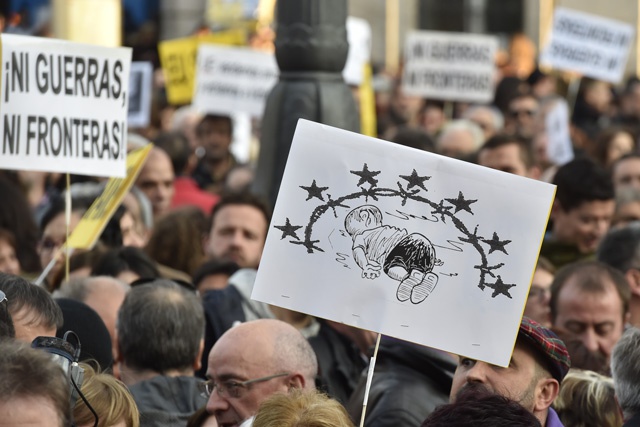 Demonstrators hold placards as they protest against the European Union - Turkey migrant deal proposal to deport refugees back to Turkey, at Puerta del Sol square in Madrid on March 16, 2016. (GERARD JULIEN / AFP)

(AFP) - European Union leaders begin a difficult summit on Thursday to push for a crucial agreement with Turkey to curb the continent's massive migration crisis despite threats by Cyprus to sink the deal.

The plan proposed by Ankara last week to a desperate, divided Europe was hailed by German Chancellor Angela Merkel on Wednesday as the "first real chance" to end the influx of refugees and migrants.

But the ambitious proposal, under which Turkey would take back all asylum seekers arriving in Greece in what has become Europe's biggest migrant crisis since World War II, faces heavy criticism on several fronts.

European Council President Donald Tusk -- who will chair the summit of 28 EU leaders on Thursday before they are joined by Turkish Prime Minister Ahmet Davutoglu on Friday -- said there was hard work ahead.

"Work is progressing but there is still a lot to do," Tusk said in his invitation letter to leaders. "The catalogue of issues to be resolved before we can conclude an agreement is long."

European Commission chief Jean-Claude Juncker meanwhile said on Twitter that he was "cautiously optimistic that we will conclude a binding agreement with Turkey" as he held eve-of-summit talks with Cyprus.

The summit comes as the UN said migrant arrivals in Greece alone had topped one million since January 2015, accounting for most of the 1.2 million people who sought asylum in the EU last year as they flee war in Syria, Iraq, Afghanistan and elsewhere.

Tusk stressed that the parts of the migration deal that involve "re-energising" Turkey's long stalled EU membership bid should also be "an opportunity to support the settlement talks in Cyprus. Only if this is possible, can we move forward here."

Cyprus has threatened to block the deal over long-standing disagreements with Ankara over the island, which has been divided since 1974 when Turkish troops invaded its north in response to an Athens-engineered coup attempt.

The only capitals that Tusk visited this week were Nicosia and Ankara, underscoring the seriousness of the threat.

Despite frantic efforts in Brussels to "rebalance" the deal in recent days, Tusk meanwhile admitted a major stumbling block remains the legality of the deal.

Under the key clause, in exchange for Turkey taking back all migrants arriving in Greece, the EU will resettle one Syrian for every Syrian allowed to remain on Turkish soil.

The UN and rights groups have warned that this amounts to the illegal mass expulsion of asylum seekers.

"An absolute priority is to ensure that our decisions respect both EU and international law," Tusk said in his letter.

A draft of the summit conclusions stresses that the one-for-one plan is a "temporary and extraordinary measure".

Proposals to give Turkey visa-free travel to the EU's Schengen passport-free zone by June have also worried several countries.

Many critics have voiced unease over human rights concerns in any deal with Turkey, over its arrests of journalists and academics and an intensifying military campaign against Kurdish separatists.

France has warned against attempts by Turkey to strong-arm Europe, and Czech President Milos Zeman charged that Ankara's request for billions of euros more in EU aid amounted to "blackmail".

Merkel however told the Bundestag lower house of parliament on Wednesday that no shortcuts would be taken and that EU membership for Turkey was "not on the agenda now".

Europe has been deluged by people fleeing war and misery since the start of last year, most hoping for new lives in wealthy Germany and Scandinavian countries.

The flow of people into northern Europe has been halted for now as eastern European countries have effectively shut down the Balkans route with coordinated border closures.

This, however, has caused a bottleneck of more than 40,000 migrants in Greece including thousands in dire conditions in makeshift camps on the border with Macedonia.