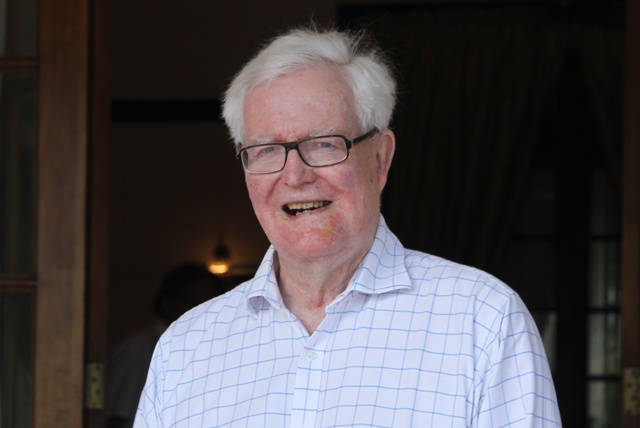 (Seychelles News Agency) - Lord Hurd of Westell was the British Foreign Secretary during tenure of Prime Minister Margaret Thatcher and also Prime Minister John Major, having also served as Home Secretary and Secretary of State for Northern Ireland . Educated at Eton and Trinity College, Cambridge. Deputy Chairman of Coutts & Co., High Steward, Westminster Abbey, Senior Advisor of Hawkpoint. Lord Hurd sits on the Appointments Commission, is Honorary President of the Prison Reform Trust, a Co-President of the Royal Institute of International Affairs and Chairman of the German British Forum. Acclaimed author and writer.

Gerard Govinden spoke to him this week, while Lord Hurd visited Seychelles.

Lord Hurd: I think the present British government, the coalition government led by Prime Minister David Cameron has laid down that we must have a more active role in the Commonwealth. The British government has been quite brave in protecting the overseas aid budget which we have. It is resisting efforts by (British) people who say, understandably, why not spend the money here at home on schools, hospitals when we have so much need. But he has said: “No, it is our duty to give substantial foreign aid.” That is what we continue to do and he has been quite brave in that respect.

GG: What is the concept of the Commonwealth and what are its values?

GG: Some critics say that the heart of the Commonwealth only beats during the CHOGM  (Commonwealth Heads of Government Meeting) and the four yearly Games. What is your opinion about this comment?

Lord Hurd: It’s not quite true. The Commonwealth has a secretariat which administers a whole range of Commonwealth programmes. I had a hand myself personally when I was Foreign Secretary in establishing and confirming the Chevening scholarship. There are many Seychellois who have benefitted from the Chevening scholarship programme and I’m proud of that. It’s a good thing. These are people who have carefully been chosen from right across the world and those are people who are likely to go far. That’s a good thing to do and the more we can do the better. I am glad you have your university. I’ve met the vice-chancellor. Obviously you are making progress there. The Seychelles government has at its head a man (President James Michel) who is well known and respected for education. He was the Minister for Education. Education is one of his enthusiasms and that’s a very good enthusiasm.

GG: What is the usefulness of the CHOGM?

Lord Hurd: At any given moment there are bound to be problems within the Commonwealth between one country and another. The purpose of a CHOGM is to iron those out and see if ways can be found of resolving them. You see that in Africa, in Asia,between India and Pakistan for example. All these are problems which can become quite ugly. But the Commonwealth exists to try to keep them under control and to try and solve them. It’s been a long time since I went to a CHOGM but I did in my time go to two – one in Harare and one in Singapore. I saw it at work. I saw that although she does not interfere with the politics, the Queen is there as the head of Commonwealth and is accepted by everybody. She helps to bring people together.

GG:  What do you think is the attitude of the rest of the world towards the Commonwealth?

Lord Hurd: I think the rest of the world, the countries outside the Commonwealth find it a little difficult to understand. I’ve heard arguments during diplomatic events in England why someone is a high commissioner and another is an ambassador. Well, a high commissioner comes from a country within the Commonwealth. It means closer access to people in power in London and a greater understanding.

Lord Hurd: No. If you look at the countries which are members of the Commonwealth it is not to say that they are neo-colonial. They have almost all of them given up colonial domination and have become independent states. The Commonwealth is based on equality. At the CHOGM, the Seychelles representative, that is the President, has exactly the same standing as any other country. There is no question of superiority. It is comradeship based on equality and guarantees the future of the Commonwealth.

GG: Do you think the Commonwealth will survive taking into consideration it has limited powers to enforce its values?

Lord Hurd: If you are talking about military power, the British power is quite limited and obviously other countries quite rightly don’t want to become involved in other people’s problems. The Commonwealth is a means of solving problems peacefully. Zimbabwe is a problem and we have our views about President Mugabe. We don’t think he has done a constructive job in the last few years. Originally I think he did. We express ourselves freely. We don’t have the right to dictate to President Mugabe or to any other Commonwealth country.

GG: The Commonwealth has been a hard campaigner for climate change and has given small island developing states (SIDS) the opportunity to speak at international fora. Is it using the SIDS to stay relevant?

Lord Hurd: Climate change is a problem that one country cannot solve by itself. It is very important that the Indian Ocean countries should come together and work out their own Indian Ocean solution. The European and American countries can help with that. Seeing ships coming in at the Victoria harbour this week, I think it is a good thing.

GG: Moving to Seychelles now, what is your impression of the country?

Lord Hurd: This is my first visit to Seychelles. I am very impressed by the geography of the islands. I had a vision of islands flat and sandy. Instead there are mountains and beautiful scenery. I’m enjoying Seychelles very much. I find the British have a role here, we are helpful to the Seychellois, and have good relations with the Seychelles government.

GG: Do you intend coming back to Seychelles?

Lord Hurd: Well, if it’s possible and I get the opportunity I would like to. It’s obvious than in just five days one cannot see a lot of things. I would like to go out to some of the other islands, but for that you need time.

GG: What is your impression of how the country is being managed?

Lord Hurd: My impression is Seychelles is being well managed. I know you have had problems in the past but it seems to me you’ve found a way through. This is now settled and Seychelles is an increasingly prosperous country. Of course tourism is very important to Seychelles and the prospect is very good. If you discover oil then you will have to balance the two out as you may not be able to do both at the same time. Fishing of course is very important. I’m impressed by the amount of cooperation Seychelles makes with its neighbours – Mauritius, Maldives and so on – and with the mainland Africa. You have good relationships and that’s very important. As your President said cooperation between the different countries of the Indian Ocean is really important. Thinking about the issue of piracy, it looks to me that you have tackled the problem bravely and Britain has given you some help. We are willing to continue that out.

GG: Finally, with Russia possibly annexing Crimea of the Ukraine, do you think we are going back to the Cold War?

Lord Hurd: No I don’t think so. We in Britain are not quite clear what President (Vladimir) Putin is aiming at. I don’t think myself that he is trying to reestablish the Russian empire. But he sometimes says things and does things which are hostile to its neighbours and these cause some problems. And that’s the argument going on at the moment about the Ukraine. You get countries which make quite a big noise but it comes to a point that they are ready to discuss. I think this is probably where we are with the Ukraine issue.