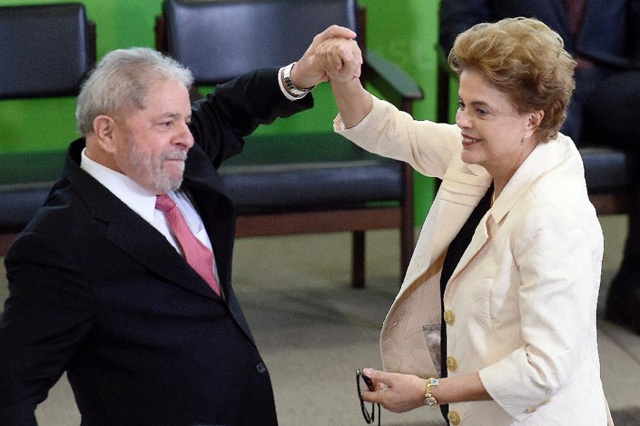 (AFP) - Brazilian lawmakers relaunched impeachment proceedings against President Dilma Rousseff Thursday and a judge blocked her bid to bring her powerful predecessor into her cabinet, intensifying the political crisis engulfing her.

The setbacks for the 68-year-old leftist leader came a day after fresh street protests erupted because of new evidence in a corruption scandal that pointed to connivance between Rousseff and her predecessor and mentor, Luiz Inacio Lula da Silva.

Just hours after Rousseff swore in Lula, 70, as her new chief of staff on Thursday, a judge issued a ruling suspending the appointment over allegations that she was trying to protect him from corruption charges.

Rousseff accused her enemies of mounting a "coup" against her.

Lula's new position would grant him ministerial immunity, protecting him from prosecution in criminal court.

Rousseff got as far as giving Lula a post-ceremony hug before federal judge Itagiba Catta Preta suspended the ex-president's nomination to the cabinet chief post "or any other that grants him immunity."

Government lawyers promptly launched an appeal against that preliminary injunction, which applies until a definitive court ruling on the matter.

Shortly after the injunction, Brazil's lower house of Congress launched a committee to consider impeaching Rousseff over corruption accusations in a separate case.

She is accused of manipulating the government's accounts to boost public spending during her 2014 re-election campaign.

The drive to impeach her was launched by the opposition in December but had been put on hold by the courts over procedural issues which were finally resolved late Wednesday.

Thursday's events plunged Rousseff's government into deeper uncertainty as she struggles with public anger, a deep recession and the splintering of her coalition in congress.

Lula and Rousseff have between them governed Brazil for the past 13 years. Lula presided over a boom, but political and economic crises are now gripping Latin America's biggest economy.

Protests erupted Wednesday when an anti-corruption judge leaked a wire-tapped phone call between Rousseff and Lula that suggested she appointed him to save him from arrest.

"Shame!" shouted a protester as Lula was sworn in. The ex-president's supporters chanted slogans accusing their opponents of seeking a coup.

"The putschists' shouting won't make me veer from my path or bring us to our knees," said Rousseff.

"If they violate the rights of the president, what will they do with those of the citizens? That is how coups start."

Lula, who led Brazil from 2003 to 2011, is charged with accepting a luxury apartment and a country home as bribes from executives implicated in a multi-billion-dollar corruption scam at state oil company Petrobras.

Rousseff called Lula's bugged phone to tell him she would be sending him the official decree nominating him as her chief of staff so he could make use of it "if necessary."

Cabinet ministers can only be tried before the Supreme Court in Brazil, and ministerial immunity would protect Lula from criminal court.

Investigators say construction companies conspired with Petrobras executives to overbill the oil giant to the tune of $2 billion, paying huge bribes to politicians and parties along the way.

Lula denies involvement in the scandal.

Rousseff's office said the phone call was about a simple procedural matter and accused Moro of a "flagrant violation of the law and the constitution."

But the recording caused thousands of people to flood into the streets in protest on Wednesday.

"The markets are already starting to foresee the fall of Dilma Rousseff's government," said Alex Agostini, an economist at Brazilian consultancy Austin Rating in Sao Paulo.

He said the surge was largely prompted by the release of the recording.

Petrobras shares shot up by 12 percent.