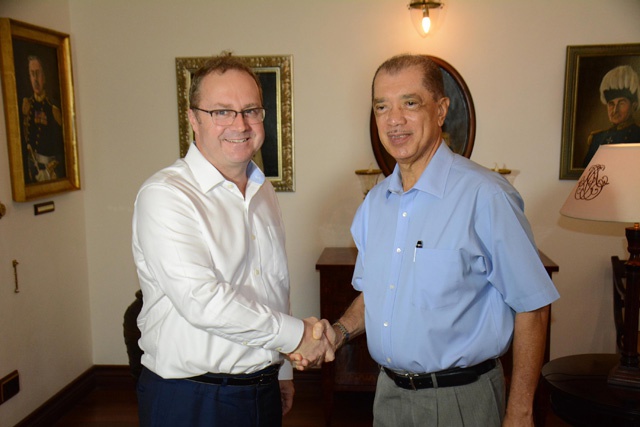 (Seychelles News Agency) - Darkening clouds over the global economy and the need for all countries to be vigilant of a possible impact on their respective economies. That was a key focus of discussions Friday morning, between the International Monetary Fund, IMF’s Executive Director for the Asia-Pacific region, Barry Sterland and the Seychelles President James Michel.

“The Seychelles’ performance in the past has been well noted in the IMF, with very strong reform performance and I think that resilience needs to be maintained going forward to guard against some of the downside risks that are becoming apparent in the international economy,” Sterland told the local press.

He is part of an IMF mission visiting the 115-island archipelago in the western Indian Ocean to undertake a review of its economic performance.

Seychelles is among 15 countries that falls under the Asia-Pacific constituency, which Sterland represents. The others are Australia, Kiribati, South Korea, the Marshall Islands, Micronesia, Mongolia, New Zealand, Palau, Papua New Guinea, Samoa, the Solomon Islands, Uzbekistan, Tuvalu and Vanuatu.

Wide-ranging economic reforms were initiated by the Seychelles government in 2008 with the assistance of the IMF, following the global financial crisis when the country was faced with crippling levels of external debt.

The five-year IMF-backed reform was completed in October 2013, after which the IMF’s Executive Board gave its approval to support a new generation of reforms in the Seychelles.

In a press statement issued Friday afternoon, State House said the partnership between the Bretton Woods institution and Seychelles, and its continued support of the island nation’s economic reform programme was also highlighted in the meeting.

“The way forward continues to be challenging, but we remain optimistic that our strong fiscal and monetary policies, legal frameworks and bold decisions that we continue to take, will ensure that we continue to make further sustainable economic progress for the benefit of the Seychellois people,” said Michel in the statement.