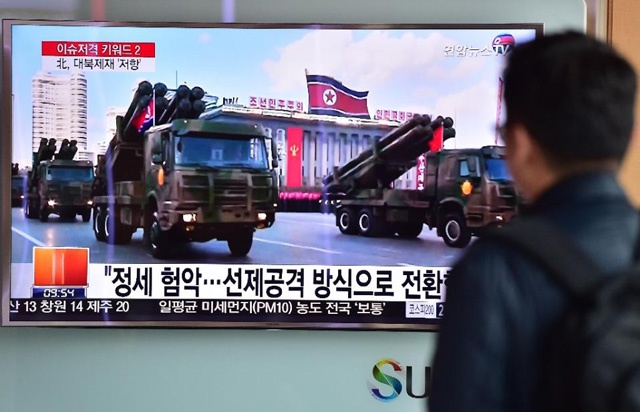 A man in Seoul watches a news report on North Korean missiles on parade in Pyongyang on March 4, 2016 (AFP Photo/Jung Yeon-Je)

Friction on the divided Korean peninsula has deepened since the North carried out its fourth nuclear test on January 6, followed a month later by a long-range rocket launch that was widely seen as a disguised ballistic missile test.

US defence officials said they had tracked two launches -- both believed to be medium-range Rodong missiles fired from road-mobile launch vehicles.

The Rodong is a scaled-up Scud variant with a maximum range of around 1,300 kilometres (800 miles).

South Korean military officials said the first missile was launched from Sukchon in the country's southwest at 5:55 am (2055 GMT Thursday) and flew 800 kilometres before splashing down in the East Sea (Sea of Japan).

The second, fired about 20 minutes later, disappeared off radar early into its flight.

They came a day after US President Barack Obama signed an order implementing tough sanctions adopted earlier this month against North Korea by the UN Security Council, as well as fresh unilateral US measures.

For the past two weeks, Pyongyang has maintained a daily barrage of nuclear strike threats against both Seoul and Washington, ostensibly over ongoing, large-scale South Korea-US military drills that the North sees as provocative rehearsals for invasion.

To register its anger at the joint exercises, the North fired two short-range missiles into the East Sea on March 10.

A few days later, Kim Jong-Un announced that a nuclear warhead explosion test and firings of "several kinds" of ballistic missiles would be carried out "in a short time".

Calling the move a direct challenge to the UN Security Council and the international community, Moon said the South's military stood ready to respond immediately to any North Korean threat to national security.

Existing UN sanctions ban North Korea from the use of any ballistic missile test, although short-range launches tend to go unpunished.

A Rodong test is more provocative, given its greater range, which makes it capable of hitting most of Japan.

The last Rodong test was in March 2014, when two of the missiles were fired into the East Sea.

Japanese Prime Minister Shinzo Abe condemned the launch and said his government would coordinate its response with the US, South Korea and other nations concerned.

The US State Department urged Pyongyang to refrain from any actions that could "further raise tensions."

While North Korea is known to have a small stockpile of nuclear weapons, its ability to deliver them accurately to a chosen target on the tip of a ballistic missile has been a subject of heated debate.

Most experts believe it is still years from developing a working inter-continental ballistic missile (ICBM) that could strike the continental United States.

But Kim's announcement of further tests on Tuesday came as he monitored a simulated test of the warhead re-entry technology required for such a long-range nuclear attack.

The test was a complete success, state media said, and provided a "sure guarantee" of the warhead's ability to withstand the intense heat and vibration of re-entering the earth's atmosphere.

South Korea said it doubted the North had mastered re-entry technology, although it was less sceptical a few days before when Kim said it had miniaturised a nuclear warhead that could fit on a missile.

South Korean markets shrugged off the latest launches, with the Korea Composite Stock Price Index (KOSPI) closing at a yearly high Friday, and the Korean won climbing to its highest level against the US dollar this year.