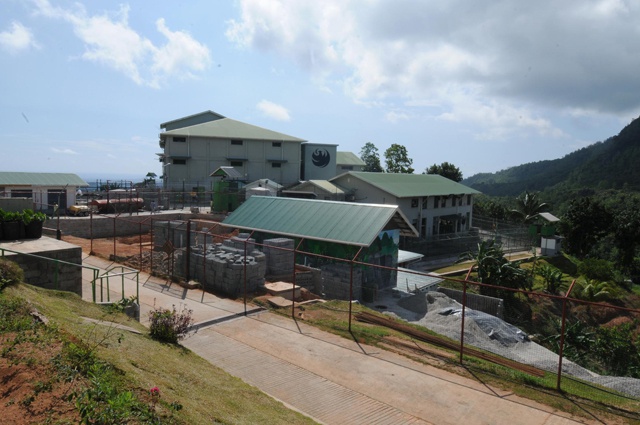 File Photo: The Montagne Posee prison, situated atop the mountains in the central region of the main Seychelles island of Mahe. (Patrick Joubert, Seychelles News Agency)

(Seychelles News Agency) - The Seychelles President James Michel has ordered an inquiry to determine the circumstances leading to the death of a prison inmate, early Saturday morning.

According to the prison authority, 40-year-old Robert Banane had sustained some injuries at the main Seychelles’ prison at Montagne Posée, on the main island, Mahé. This happened on Friday when there were also reports of a riot at the prison.

"We know that Robert Banane was on the roof top of the prison, and that he fell and suffered some serious injuries. The investigation will determine what exactly happened," the prison Superintendent Maxime Tirant said to SNA.

Banane had been sentenced to two months imprisonment for the non-payment of a fine, and was to be released soon. He passed away at the Seychelles hospital, where he had been admitted following the incident at the prison.

Meanwhile, the prison authority has confirmed that calm has been restored at the prison, following the riot that broke out at the detention facility.

Officials from the Ministry of Home Affairs, the prison and the police met on Saturday morning to determine what exactly happened at the prison, located in the lush tropical mountains leading to the western part of Mahé.

According to the prison superintendent, Maxime Tirant, there have been several incidents at the prison, since Thursday afternoon.

Tirant told SNA that three inmates had tried to escape on Thursday but that this was detected by security cameras and the inmates were brought back to their cells.

"Following this incident some prisoners in the ‘high security’ section refused to settle down and we sought the assistance of the police to help restore calm, but after that the riot spread to where the other inmates are being detained," said Tirant.

"Some of the prison infrastructures were damaged during these incidents, but the prison authority has managed to have everything back in order,” he added.

The Home Affairs Minister, Charles Bastienne has said that investigation into these incidents are ongoing.

In a post published on his Facebook page, Bastienne also said that on Monday he will be able to give more details on the circumstances that led to the death of inmate Robert Banane, after the autopsy results are released.

Seychelles Police: No signs of foul play in hanging death of Honduran man