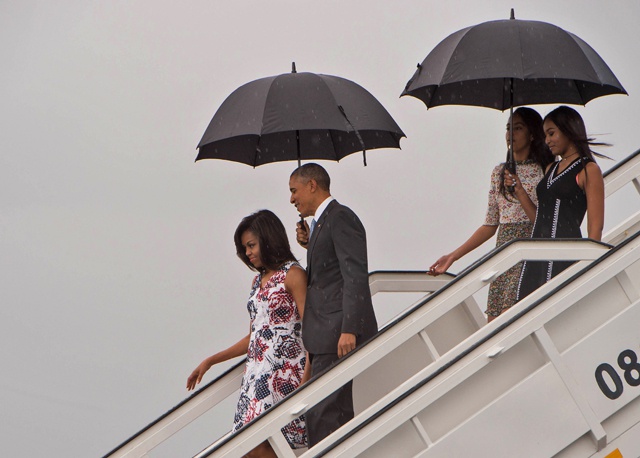 (AFP) - Barack Obama landed in Cuba Sunday for a historic visit to end a half-century-long Cold War standoff, although rain and a no less heavy police presence dampened the festive mood.

As Air Force One touched down in Havana, the US president cheerfully began the landmark trip by tweeting in local slang: "Que bola Cuba?" -- or "What's up?"

Obama, his wife Michelle and their two daughters Sasha and Malia clutched umbrellas to shield themselves from drizzle as they descended the steps to the tarmac.

Obama was not only the first sitting American president to visit Cuba since Fidel Castro's guerrillas overthrew the US-backed government of Fulgencio Batista in 1959, but the first all the way back to Calvin Coolidge in 1928.

"President Coolidge came on a battleship. It took him three days to get here. It only took me three hours," Obama joked during a meeting with staff from the freshly reopened US embassy in Havana.

"This is a historic visit," declared Obama, who was to meet Monday with Cuban President Raul Castro, the lesser known brother of Fidel, who handed over the leadership in 2008.

For Cubans dreaming of escaping isolation and reinvigorating their threadbare economy, the visit has created huge excitement.

But just hours before Obama's arrival there was a reminder of the communist state's darker side.

The protesters were from the Ladies in White group, formed by wives of former political prisoners. Police bundled them into vehicles outside a church where they attempt to hold protests almost every Sunday.

Police were also out in large numbers when Obama left for his first event, a visit to the beautifully restored old town of Havana. The heavy rain and stifling presence of security agents left the streets eerily empty.

Plainclothes agents blocked off streets, buildings in the area were put under temporary lockdown, and ordinary Cubans were hard to find anywhere close to Obama's route -- easily outnumbered by security agents and foreign tourists.

"Maybe they let me come here because they think I'm a tourist with my backpack," said civil engineer Ariel Hernandez, 42, who was trying to get a glimpse of the president.

Despite the strained atmosphere, Hernandez echoed many Cubans when he said he had great expectations for the visit.

Obama is looking to leave a historic foreign policy mark in his final year in office.

In addition to the talks with Castro, Obama was scheduled to give a speech live on Cuban television Tuesday and attend a baseball game before leaving.

Republicans and some human rights activists have criticized Obama for dealing with Castro, given the lack of political, media and economic freedom in a country where the Communist Party retains tight control.

Dissidents called for "radical change" on the eve of the visit, but the Castro government warned that lectures on democracy would be "absolutely off the table."

The White House's deputy national security adviser, Ben Rhodes, insists that the subject will be brought up and Obama is also scheduled to meet members of Cuba's beleaguered opposition.

Washington attempted economic strangulation, the failed 1961 Bay of Pigs invasion, and CIA assassination plots against Fidel Castro -- including the legendary, but unproven story of sending him an exploding cigar.

Now, after so many failures, Obama has bet that soft power will achieve what muscle could not. The aim, Rhodes said, is to make "the process of normalization irreversible."

Although a decades-long US economic embargo remains in place -- and can only be removed by the Republican-controlled Congress -- large cracks in the sanctions regime are appearing.

Obama hopes that a host of incremental and seemingly technical steps will open Cuba's economy, transforming the island economically and politically, backers of the policy say.

Lawmakers including House Minority Leader Nancy Pelosi were with Obama, while a delegation of political and business leaders was traveling separately.

"It's a soft war using visitors as the soldiers, commercial airlines as the air force, and cruise ships as the navy," said John Kavulich, president of the US-Cuba Trade and Economic Council.

Cuba's regime, which for decades defined itself as the people's bulwark against the Yankee enemy, has bowed to the fact that Cubans would rather do business than make war.

And as if Obama's arrival were not enough to illustrate the sea change in Cuba, the Rolling Stones -- a symbol of the cultural imperialism that communist leaders used to rage against -- are playing a free concert in Havana on Friday.

General » Be a reporter: Write and send your article » Subscribe for news alert
Tags: Barack Obama, Cuba, US