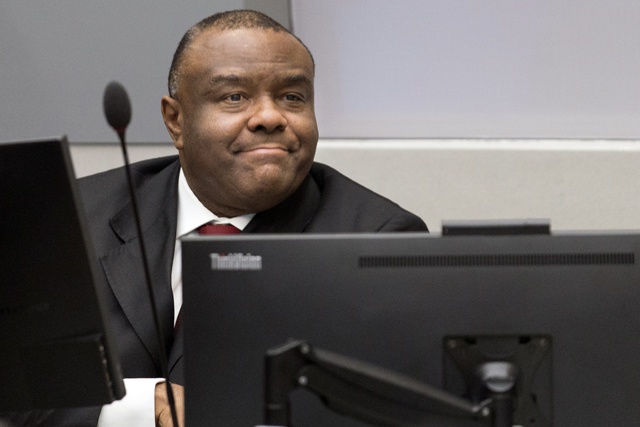 Former DRCongo leader Jean-Pierre Bemba Gombo waits in a court room of the ICC to hear the delivery of the verdict against him blamed for unbridled rapes and killings by his private army in neighbouring Central African Republic over a decade ago, on March 21, 2016 in The Hague. (Jerry Lampen / ANP / AFP)

(AFP) - Former Congolese vice president Jean-Pierre Bemba was Monday found guilty of a ruthless campaign of widespread rapes and killings by his private army in the Central African Republic, in a landmark war crimes verdict.

It is the first case at the International Criminal Court to highlight both sexual violence as a weapon of war and a military commander's overall responsibility for the actions of his troops, and was swiftly welcomed by rights groups.

The judges found Bemba guilty on all five charges of war crimes and crimes against humanity, saying he had retained "effective command and control" over 1,500 men he sent in to CAR to quell an attempted coup against the then president.

Bemba, dressed in a dark suit and red tie, listened tensely through headphones as presiding judge Sylvia Steiner read out the verdict in English.

Chief prosecutor Fatou Bensouda hailed the verdict as "historic" saying at the end of a marathon trial that the victims had been waiting a "long time" for justice.

Hollywood star and activist Angelina Jolie said in a statement it was "shocking" that the "landmark conviction" is a first at the ICC.

"I can only imagine the reaction of victims who in their hearts probably never thought that this day would come," said Jolie, co-founder of the Preventing Sexual Violence Initiative.

But Bemba's defence lawyer Peter Haynes told AFP his client was "disappointed" by the judgement.

The 53-year-old Bemba, who has been behind bars since he was captured in 2008, is expected to appeal.

"This is just really round one in what is going to be a fairly long battle," said Haynes.

The judges dismissed Bemba's defence that his Congolese Liberation Movement (MLC) had come under the control of CAR's hierarchy when they crossed into the neighbouring country in late October 2002.

Speaking slowly, Steiner read out a chilling list of rapes and atrocities, detailing how MLC forces had deliberately targeted civilians as part of a "modus operandi" as they sought to halt the coup bid against then CAR president Ange-Felix Patasse.

Men, women and children were all raped -- in one case three generations of the same family were gang-raped by MLC soldiers who held them at gun point and forced relatives to watch.

Bemba was in constant communication with his forces, issued "direct operational orders" and "had knowledge" of what was happening on the ground, Steiner said, but he had not stopped the violence.

Once a feared rebel leader in the north of the Democratic Republic of Congo, Bemba "retained primary... authority over the MLC troops" in CAR, she insisted.

Bemba will be sentenced at a later date and could face up to 30 years in jail -- or even a life sentence, if the court considers that it is "justified by the extreme gravity of the crime".

"The paramount importance of this verdict cannot be overstated. It is a landmark along the road to justice for victims of crimes of sexual violence," said Andre Olivier Manguereka, president of the Central African League for Human Rights.

Amnesty International said the guilty verdict "sends a clear message that impunity for sexual violence as a tool of war will not be tolerated".

The trial chamber granted more than 5,000 victims the right to participate in the hearings -- the highest number in any of the cases before the ICC.

With the pronouncement of the guilty verdict, the victims may have the right to claim damages.

Bemba, a wealthy businessman-turned-warlord, went on to become one of four vice presidents in the transitional government of DR Congo President Joseph Kabila.

In 2006, he lost to Kabila in a presidential run-off. He fled the next year into what he called "forced exile" in Europe and was arrested in Brussels in 2008 and handed over to the ICC.

His MLC militia has since morphed into a political party and is currently the second-largest opposition group in the National Assembly.

Bemba continues to have many supporters in Kinshasa who say they are still hoping for his release.

The country is scheduled to hold new elections in November but they will likely be postponed amid suspicions that Kabila plans to cling to power even after his mandate runs out.

Separately, Bemba and four close associates are also on trial in a second case in which they are accused of bribing witnesses in his main trial.