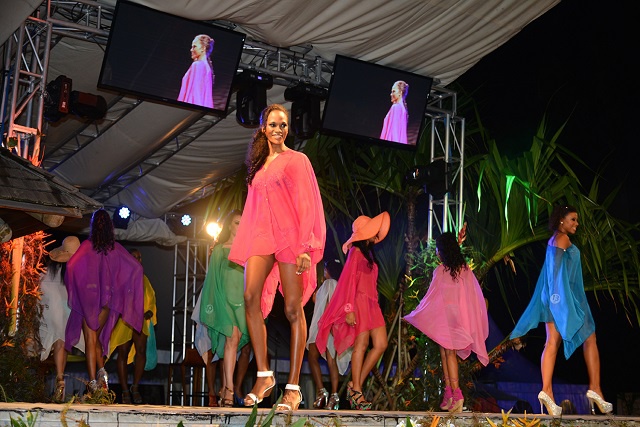 File photo: Miss Seychelles Another World 2015 contestants. 12 young ladies are currently preparing for the 2016 pageant to be held on May 28. (Gerard Larose, Seychelles Tourism Board)

(Seychelles News Agency) - Participating in the Miss Seychelles Another World pageant is a great way to develop skills that can lead to a good job, one of the newly named contestants said Wednesday.

Ruth Bonté is one of the 12 contestants that the Seychelles Tourism Board (STB) presented on Monday for the pageant scheduled for May 28.

Bonté told SNA that despite some derogatory opinions among the public about the peagent, she wanted to join to improve her personal skills.

“I joined so I would get the chance to improve some of my personal skills like self-confidence, good conduct and behaviour, punctuality and politeness,” said Bonté, who works as web-administrator.

Getting young girls to participate in the Miss Seychelles Another World pageant was not an easy task this year, says STB’s Chief Executive Sherin Naiken. She said some young ladies are reluctant to participate because of negative remarks on social media about the contestants.

“Finally after doing some scouting and approaching some ladies, we were able to convince them to join,” says Naiken.

The 12 contestants were presented in a ceremony at Espace Building in Victoria, the capital of Seychelles, an archipelago of 115 islands in the western Indian Ocean.

Another contestant, Lianne Barbe, the only participant from Praslin, the second-most populated island of Seychelles, said she has the support and encouragement from family and friends to participate in the pageant.

“I chose to participate because I wanted to do something big. I took that challenge also because I was told by my parents, friends and families that I have the potential to do it. I am willing to do whatever it takes to repay all those behind me,” says Barbe.

The grooming and training of the 12 contestants will begin following their presentation to the media and will include makeup, catwalk, language, and table dining.

The winner of the Miss Seychelles Another World pageant will participate in the Miss World pageant, one of the three most popular beauty contests worldwide. The two others are Miss Earth and Miss Universe.

Naiken says this year there will be more emphasis on building the contestants’ capabilities in the various aspects of the Miss World pageant, such as sports, and the beauty-with-a-purpose project.

“We know about the Miss Sports competition, so we want to make sure that our ladies get the chance to compete against each other. We have the dances of the world and Miss Talent, two other components that we want them to compete with each other because we know it is important, and it carries weight for the Miss World title,” said Naiken.

The reigning Miss Seychelles Another World is Linne Freminot.