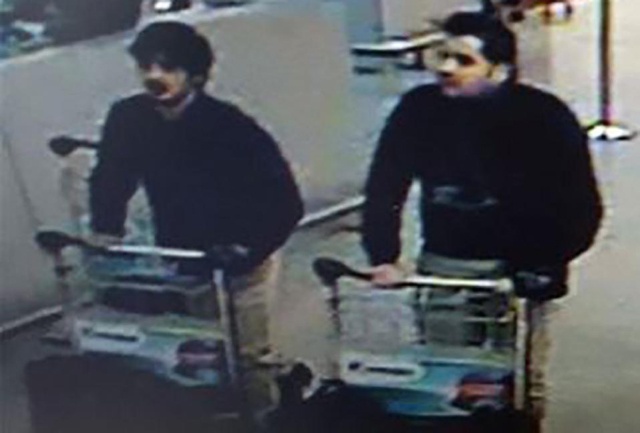 A picture released on March 22, 2016 by the Belgian federal police on demand of the Federal prosecutor shows a screengrab of the airport CCTV camera showing suspects of this morning's attacks at Brussels Airport, in Zaventem (AFP Photo/Handout)

(AFP) - Two suicide bombers who blew themselves up in Brussels are believed to be brothers who were being sought for links with Salah Abdeslam, the prime suspect in the Paris attacks, RTBF television reported Wednesday, citing police sources.

RTBF named the two as Khalid and Ibrahim El Bakraoui, saying Khalid last week rented an apartment in Brussels under a false name where police found Abdeslam's fingerprints after a raid.

Police arrested Abdeslam, Europe's most wanted man, in a dramatic operation in Brussels on Friday that had been hailed as a "victory" in Belgium's campaign against terrorism.

Khalid is also linked to renting an apartment in the southern Belgian city of Charleroi from where Abdeslam and the other Brussels-based Islamic State jihadists set off to carry out the November 13 Paris attacks which left 130 people dead.

A police source told AFP on Tuesday that a man in the middle of three men seen on closed circuit television at the airport just before the twin blasts could be Ibrahim El Bakraoui.

Other reports Wednesday said one of the brothers, who they did not name, could have been involved in the separate attack Tuesday on the Brussels metro station of Maalbeek, which left about 20 dead.

Belgian police earlier Wednesday issued an appeal for information about the two men believed to have blown themselves up at the airport.

The police posted several tweets with the caption "Terrorism: who knows this man?", showing CCTV close-ups of two men pushing trolleys with suitcases through the airport departure hall.

They gave three slightly different images for each of the two men who the federal prosecutor said Tuesday had likely blown themselves up in the attack.

A third man, dressed in a light coloured jacket and wearing a dark hat, who was shown with the two others in a CCTV grab issued Tuesday, is believed to have fled the scene and is now the subject of a massive manhunt.