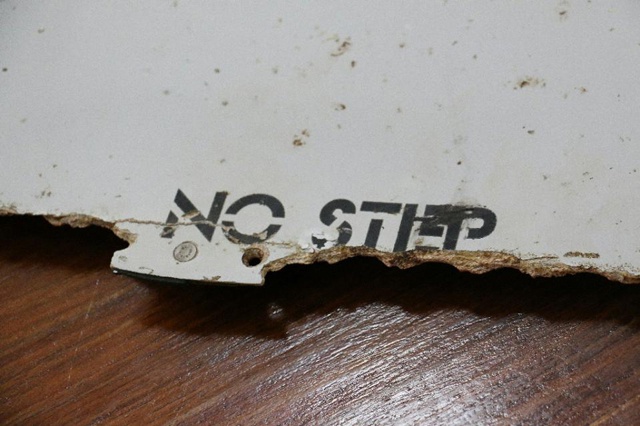 (AFP) - Two pieces of debris found in Mozambique are "almost certainly from MH370", Australia said Thursday, after technical analysis provided the latest clue to the fate of the missing Malaysia Airlines aircraft.

Until the latest discoveries, only a wing part recovered from a beach on the Indian Ocean island of Reunion which lies to the east of Mozambique had been confirmed as coming from the plane which disappeared two years ago.

"The analysis has concluded the debris is almost certainly from MH370," Transport Minister Darren Chester said, adding that Malaysian investigators had found the pieces were consistent with panels from a Malaysia Airlines Boeing 777 aircraft.

"That such debris has been found on the east coast of Africa is consistent with drift modelling performed by (national science body) CSIRO and further affirms our search efforts in the southern Indian Ocean."

The two pieces are a flat grey fragment with the words "No Step" printed along one side, found on a sandbank, and a metre-long piece of metal picked up by a holidaymaker.

Australia is leading the search for MH370 in the remote Indian Ocean, where the Kuala Lumpur-Beijing flight is believed to have diverted when it disappeared on March 8, 2014 carrying 239 passengers and crew.

Another piece of debris yet to be identified as coming from the missing jet was picked up near Mossel Bay, a small town in Western Cape province, South African authorities said Tuesday. They did not reveal when it was found.

Malaysia is working with South African officials to arrange for the examination of the fragment, which Australia's Joint Agency Coordination Centre (JACC) said on Wednesday was "suspected to be the cowling from an engine".

Mossel Bay lies more than 2,000 kilometres (1,250 miles) from Vilankulo, the Mozambican resort where one of the pieces being examined in Australia was found.

Specialists, including from Australia and Boeing, have been conducting investigations in Canberra alongside the Malaysia team on the two items after they were found in Mozambique.

When a two-metre-long (almost seven-foot) flaperon part washed up on a beach on the French overseas territory of La Reunion in July, it was the first concrete evidence that MH370 met a tragic end.

The Australian Transport Safety Bureau (ATSB), the agency leading the search, had said then that its location was consistent with drift modelling of where debris might have floated.

Chester said the hunt for the crash site, far off Australia's southwest coast, would continue.

"There are 25,000 square kilometres (9,650 square miles) of the underwater search area still to be searched. We are focused on completing this task and remain hopeful the aircraft will be found," he said.

Three vessels contracted from Dutch firm Fugro -- Fugro Discovery, Fugro Equator and Havila Harmony -- along with Chinese ship Dong Hai Jiu 101 are scouring the ocean depths, with the plane believed to have sunk up to 4,000 metres (13,100 feet).

The search has been projected to cost up to Aus$180 million (US$130 million).

The Australian, Chinese and Malaysian governments have agreed that when the target zone of 120,000 square kilometres has been fully searched -- expected to be around June to July -- they will end the hunt unless "credible new information" emerges.

Analysis of the flaperon has so far not offered further information to help solve what happened to the aircraft.

Analysts have said that only by locating the crash site and recovering the black box will authorities be able to solve the mystery of why the plane went down.