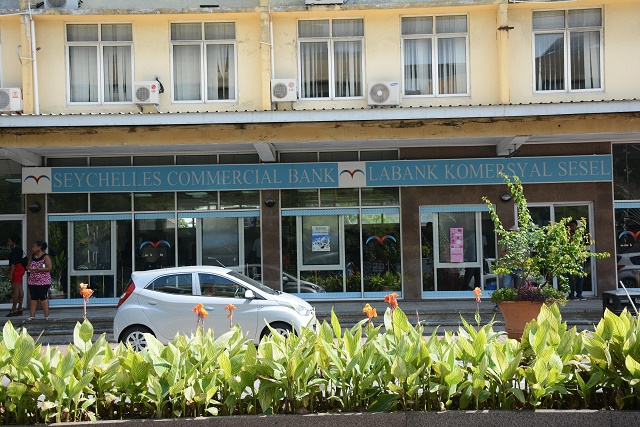 The premises of the main branch of the Seychelles Commercial Bank, in the island nation's capital, Victoria. (Patrick Joubert, Seychelles News Agency)

(Seychelles News Agency) - The Seychelles Commercial Bank is selling nearly 100,000 of its shares as the government looks to reduce its stake in the financial institution.

The bank will be accepting bids from account holders and staff in a second round share sale from April 25 to May 28.

The sale comes almost five years after the government announced its intention to sell 40 percent -- or 240,000 -- of its shares in the bank.

Seychelles' Minister of Finance Trade and the Blue Economy Jean Paul Adam said Wednesday that while the plan was to make the remaining shares available to the general public, the decision to once again limit the sale to staff and account holders was taken at the bank’s last annual general meeting.

“In the first round, there was a cap on the number of shares that could be sold per individual and that’s 250 shares. This meant that we did not reach the full 40 percent and only 23.45 percent were sold,” said Adam.

“We are launching a second round of sale for 16.55 percent shares [99,276] still at face value of 100 rupees [$7.50] but there will be not a cap on the number of shares. If demand exceeds number of shares available, they will be allocated on a pro rata basis,” he added, expressing confidence that the sale of all remaining shares will be completed this round.

Adam, responding to a question from SNA, noted that the accounts for the year 2015 are still being finalized and should be available when the shares go on sale. But he said that the bank had recorded an increase in the amount of dividends paid to shareholders in recent years.

The chief executive of the bank, Syed Naqi, told SNA that the bank has a total of 104 employees and 46,000 account holders.

While the government will remain the majority shareholder with a 60 percent stake after the latest share sale, the long-term plan is to fully privatize the financial institution.

“It’s however important that this is done in various stages, and in the first phases we want to ensure that the Seychellois people are given the opportunity to own shares at an affordable price, which is also a form of savings,” said Adam.

The Seychelles Commercial Bank is the second wholly government-owned entity that the government is taking steps to privatize, after the SACOS Insurance Group.

The privatization process of the insurance company which started in 2005 was completed in 2014.