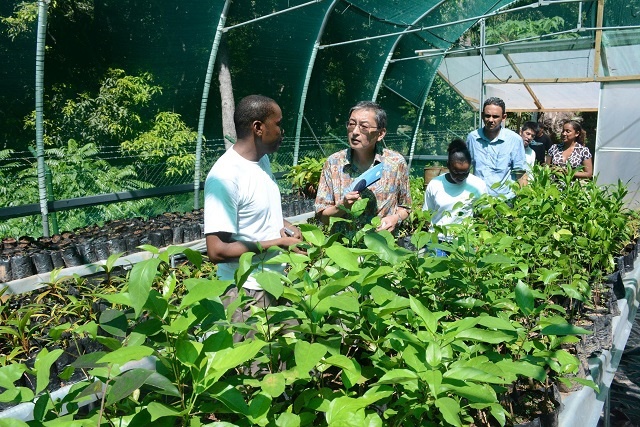 A nursery storing plant that are then used by TRASS in its rehabilitation efforts on Praslin. (Joena Bonnelame, Seychelles News Agency)

(Seychelles News Agency) - Seychelles' second-most populated island, a victim of soil erosion and forest fires, will benefit from a grant from the Japanese government for rehabilitation efforts that will be carried out by a local non-profit organisation.

Praslin, the home of the world’s biggest nut, the coco-de-mer, has received a grant of $64,500 on Monday through the Terrestrial Restoration Action Society of Seychelles (TRASS).

The granitic island of Praslin is severely degraded with noticeable scars of red top soil seen on most of its mountain peaks as a result of continuous erosion and repeated forest fires.

“This grant will further enhance our motivation towards improving the environment of Praslin and elevating it back to the status of the ‘island of palms’ as it used to be known,” said the chair of TRASS, Victorin Laboudallon.

The grant is the first of its kind awarded by Japan to Seychelles, an archipelago in the western Indian Ocean, under the Grassroots Human Security Project.

The Japanese ambassador to Seychelles, Tatsushi Terada, said the grant will indirectly benefit other sectors of the community as restoration of forests reduces flooding and water shortages.

“TRASS has received much national and international support and thanks for [their] continued effort over 30 hectares of land has already been rehabilitating,” said Terada.

Laboudallon says the grant will help complete the construction of a storage facility at Fond B’Offay, an area which is already well frequented by visitors and volunteers of the organisation.

The work of the TRASS’ volunteers involves a lot of tree planting and they also help in propagating several endemic plants of Seychelles on Praslin Island.

Seychelles' principal secretary of the environment department, Alain Decommarmond says, “TRASS is a good ambassador for environment causes and they have shown that they are worthy of the grant through their perseverance and continued involvement in rehabilitation work.”

Both Decommarmond and Terada planted endemic trees at the construction site along a pathway that will soon be a botanical trail for visitors on the island.

The non-profit organisation TRASS was launched in 2009 and has since grown into a fully-fledged environment group with over 30 volunteers actively involved in reforestation and rehabilitation of mountain peaks on Praslin.