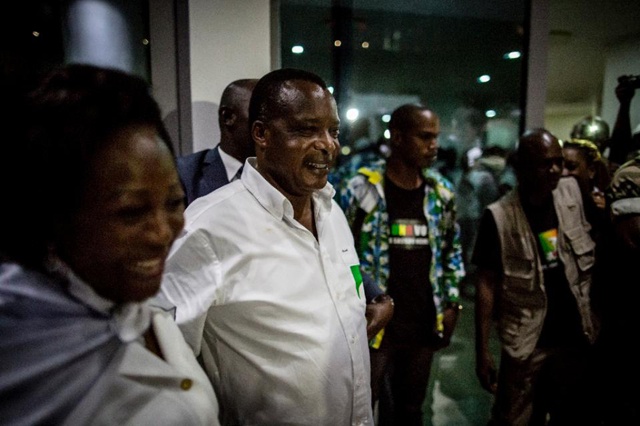 (AFP) - Congo strongman Denis Sassou Nguesso was on Thursday declared the winner of presidential elections, extending his 32 years in power in a vote the opposition says was marked by "massive fraud".

Interior Minister Raymond Zephyrin Mboulou announced the results at 3:30am (0230 GMT) on national television, saying Sassou Nguesso had secured 60 percent of the vote in the tense weekend poll held under an ongoing communications blackout.

Sassou Nguesso hailed the victory at his campaign headquarters, saying the Congolese people had "taken their destiny into their own hands" and adding that the campaign had produced a "very open" democratic debate in the former French colony.

Both of his main rivals had already rejected the partial results released Wednesday, with Kolelas' spokesman Vivien Manangou saying there had been "massive fraud".

Mokoko, who until February was Sassou Nguesso's security advisor, added: "I knew beforehand that the dice were loaded, but we had agreed to play the game."

He called for a recount, saying: "How do you want us to accept such a result?"

With telephones and the Internet cut off, neither candidate was immediately reachable after the official results were announced.

Oil- and timber-rich Congo has been on edge since an October constitutional referendum that ended a two-term limit on presidential mandates, allowing Sassou Nguesso, a 72-year-old former paratrooper colonel, to run for office again.

Critics accuse him of rampant corruption and nepotism, blasting the referendum result as a "constitutional coup".

Authorities imposed a communications blackout during the election to prevent opposition candidates from publishing "illegal results". A government source said they blackout would remain in place until after the official results.

Most shops in the south of the capital Brazzaville, an opposition stronghold, had stayed shut on Wednesday amid fears of unrest.

A French journalist was present but was unable to confirm the death.

Mokoko and Kolelas, along with the three other opposition candidates, have urged people to "exercise their sovereignty" in the event of a Sassou Nguesso victory.

They created their own parallel "technical commission" to monitor the vote and compile information from polling stations to compare it to the official results.

They said they could say "with certainty" that the opposition had beat Sassou Nguesso in the first round and that a second-round election should be held.

The European Union refused to send election observers to monitor the polls, saying conditions had not been met for a transparent and democratic vote.

The international community has since expressed concern over the fairness of the vote and called for the opposing sides to resolve their differences calmly.

"This vote took place in a worrying context, particularly due to the cut in communications," said France's foreign ministry spokesman Romain Nadal.

The EU called on all sides to use legal routes to sort out disagreements over the results and urged the authorities to restore communications.

Congo recorded growth of five percent over the five years to 2014 but remains in dire straits, with the vast majority of the population living in abject poverty.

Unemployment hit 34 percent in 2013, the last data available, and stood at 60 percent for 15 to 24-year-olds. The IMF fears "domestic instability" without progress in the battle to eliminate poverty.

Sassou Nguesso served as president from 1979 to 1992 and returned to power in 1997 following a civil war. He won two successive terms in 2002 and 2009, but both elections were contested by opposition parties.

DR Congo goes to the polls after troubled odyssey