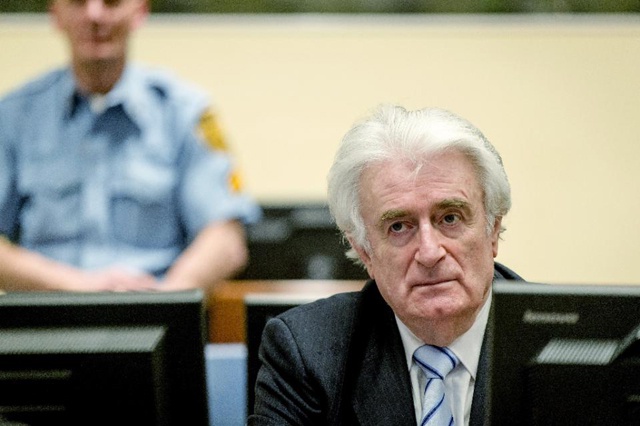 Bosnian Serb wartime leader Radovan Karadzic sits in the courtroom for the reading of his verdict at the International Criminal Tribunal for Former Yugoslavia (ICTY) in The Hague, on March 24, 2016 (AFP Photo/Robin van Lonkhuijsen)

(AFP) - Former Bosnian Serb leader Radovan Karadzic was found guilty Thursday of genocide and sentenced to 40 years in jail over the worst atrocities in Europe since World War II.

UN war crimes judges said Karadzic, the most high-profile figure convicted over the wars that tore Yugoslavia apart, bore criminal responsibility for murder and persecution during the 1992-95 Bosnian conflict.

Judge O-Gon Kwon pronounced Karadzic guilty of genocide for the 1995 Srebrenica massacre and nine other charges including extermination, deportations and hostage-taking in a verdict issued more than two decades after he was first indicted.

UN chief Ban Ki-moon hailed it has a "historic day" for justice.

"What is important is that a sentence has been passed against a terrible political ideology," agreed Bakir Izetbegovic, the Muslim member and chairman of Bosnia's tripartite presidency.

"This is the most important verdict since Nuremberg."

But relatives of the victims voiced disappointment, saying Karadzic should have been given a life sentence.

In what will be a blow to thousands of victims, Karadzic was acquitted of a second count of genocide.

The court in The Hague said it did not have enough evidence to prove "beyond reasonable doubt" that genocide had been committed in seven Bosnian towns and villages over two decades ago.

After former Serbian president Slobodan Milosevic died while on trial in 2006, the last high-ranking official of the top leadership to face judgement will be notorious Bosnian Serb military chief Ratko Mladic, "The Butcher of Bosnia" whose verdict is due next year.

The Karadzic case is also likely to drag on for years, as his legal advisor said he would appeal the verdict issued by the International Criminal Tribunal for the Former Yugoslavia.

The fervently nationalist leader was found guilty for his role in the Bosnian war that claimed more than 100,000 lives and displaced 2.2 million others.

The 70-year-old listened stony-faced as Kwon said it was clear Karadzic bore "individual criminal responsibility" for murder, persecution as well as the hostage-taking of UN peacekeepers.

Karadzic "was at the apex of political, governmental and military structures" of the Bosnian Serb leadership and "at the forefront of developing and promoting its ideologies," Kwon said.

A long-time fugitive from justice until his arrest on a Belgrade bus in 2008, Karadzic, a one-time psychiatrist with a trademark bouffant hairdo, was found guilty of genocide for his role in the Srebrenica massacre in eastern Bosnia.

Almost 8,000 Muslim men and boys were slaughtered and their bodies dumped in mass graves by Bosnian Serb forces who brushed aside Dutch UN peacekeepers in the supposedly "safe area."

The massacre was the worst bloodshed on European soil since World War II.

There was "a clear intent to kill every able-bodied Bosnian male from Srebrenica," Kwon said, and the operation was "intended to destroy the Bosnian Muslims" in the UN-protected enclave.

"Thousands came here to tell their stories and courageously confront their tormentors. Today with this conviction that trust has been honoured," he said in a statement.

But Karadzic's lawyer Peter Robinson said his client was "disappointed and astonished".

"He feels that he was convicted on inference instead of evidence and will appeal the judgement," Robinson said outside the tribunal.

In Srebrenica, relatives of the men murdered there slammed the sentence.

"He killed so many children and will perhaps live long enough to regain freedom," said Bida Smajlovic, 63, who lost her brother.

There was also disappointment among demonstrators who had gathered outside the court from early morning.

"I was hoping for a life sentence," said Adil Draganovic, 63, who was held captive in a Bosnian Serb concentration camp.

"But then again 40 years is as good as a life sentence for him," he told AFP.

The hearing, attended by more than 200 journalists and over 100 diplomats and observers, took place amid tight security.

Karadzic was also found guilty of being behind the 44-month siege of Sarajevo in which 10,000 civilians died in a relentless campaign of sniping and shelling.

During the trial, which opened in 2009 and ended in October 2014 after an exhausting 497 days in the courtroom, some 115,000 pages of documentary evidence were presented along with 586 witnesses.

In an unexpected drama before the verdict, the former spokeswoman for ex-chief prosecutor Carla del Ponte was arrested at the tribunal by UN guards.

Florence Hartmann had been convicted of contempt and sentenced to seven days in jail for revealing confidential court details in a 2007 book.