The persecution of Christians, the world’s sufferings and hopelessness highlighted as Seychelles’ Christians celebrate Easter 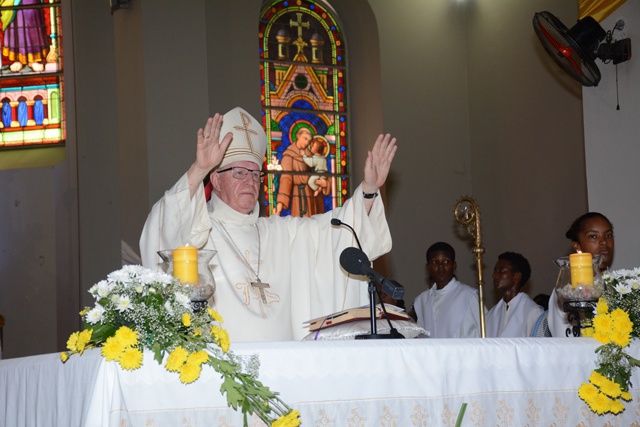 (Seychelles News Agency) - The resurrection of Jesus Christ represents the total victory of light over darkness, of life over death and of love over hate, the Roman Catholic Bishop in Seychelles said on Sunday.

Bishop Denis Wiehe presided over Easter mass at the Cathedral of Immaculate Conception in the Seychelles capital, Victoria.

He also used his sermon to pay tribute to the nuns of the eastern world churches who are being persecuted, addressing specifically the death of four nuns killed in Yemen earlier this month.

The Easter mass was also the first time the Roman Catholic Bishop of Seychelles addressed the proposed decriminalization of homosexuality in the island nation, saying activities within the church had prevented him from presenting the position of the church on the matter.

The decision to repeal the law that criminalizes homosexuality, which will need the approval of the national assembly, was announced by the Seychelles President James Michel in his State of the Nation address in February.

"Members of SIFCO [Seychelles Inter-Faith Council] have decided that each religious group will present their respective positions and some have already done so,” said Bishop Wiehe, adding that his position would appear in the next edition of L’écho des Iles, a publication of the Roman Catholic Church.

Easter messages were given across the island nation as believers in the Indian Ocean archipelago joined those worldwide to remember the resurrection of Jesus Christ.

In his Easter message, the Bishop of the Anglican Diocese of Seychelles talked about how real life begins after death because of Jesus’ resurrection and has called on believers to ponder on how much time is spent worrying about material things.

Bishop Wong also touched on life transformations that are happening, paying a particular focus on the ‘voices of hopelessness and despair’ in the world today.

“Suddenly we have become so painfully and personally aware of the presence of terrorism in London, Paris and Brussels lately. And there are diseases for which we have no cure. There are problems at home. Children are still being abused. People are sleeping on the streets. You can be filled with despair. And if the only hope that we have is the hope that this world offers, we have no hope because the message of this world is despair,” Bishop Wong said in his message, adding that Jesus offers life, hope, joy, love, peace and reason for living.

Aside of attending church services, Easter is a day which people in Seychelles spend sharing a meal and quality time with family or friends, either at home or in other places like on the beach.

Easter is the most important Christian celebration in Seychelles. Seychelles has a population of around 93,000 and according to the National Bureau of Statistics 76 percent of the Seychelles population is Roman Catholic, 6 percent Anglican, 2.4 percent Hindu, 1.6 percent Muslim, the rest are of other faiths.