Somali pirates on trial in France for fatal hijacking 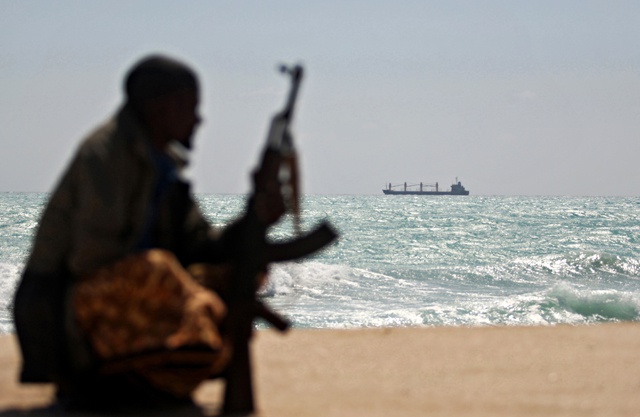 File Photo taken on January 7, 2010 shows an armed Somali pirate along the coastline while the Greek cargo ship, MV Filitsa, is seen anchored just off the shores of Hobyo town in northeastern Somalia where its being held by pirates. (AFP PHOTO/ MOHAMED DAHIR)

(AFP) - Seven suspected Somali pirates are due in court in Paris on Tuesday over the hijacking of a French yacht that left the owner dead and his wife facing a hellish kidnapping ordeal.

Christian and Evelyne Colombo had sold everything to make their dream voyage around the world.

But around lunchtime on September 8, 2011, naval authorities received a distress signal from their "Tribal Kat" catamaran.

They had left the port of Aden in Yemen five days earlier and were heading for Oman, a journey that took them through notoriously pirate-infested waters.

A German frigate found the boat several hours later. There were bullet holes in the deck and a pool of blood with a pair of glasses floating in it. No one was onboard.

Two days later, a Spanish warship located the skiff suspected to belong to the pirates. They tried to approach but turned away when the attackers dragged Evelyne Colombo into view, a gun to her head.

Evelyne Colombo told her rescuers that her husband's body had been dumped into the sea. It was never found.

She had spent a nightmarish 48 hours in the hands of the pirates, kept under a tarpaulin, drenched by waves and in constant fear of death.

They have given their professions as policeman, taxi driver, fisherman or even "coolie" -- a old colonial-era term meaning "porter".

At least one may not face trial, having reportedly developed psychological problems in prison -- a result not just of the isolated detention they currently face, but also of the miserable lives they experienced before.

"War... hunger... for these men to properly judged, the court must understand the hell from which they have come," said one of their lawyers, Martin Reynaud.

He added that this could only explain rather than excuse their actions, and said he was conscious of the ongoing pain experienced by the widow and two daughters left behind by Christian and Evelyne Colombo.

The accused have claimed the two men killed during the assault -- identified as "Shine" and "Abdullahi Yare" -- were the leaders of the operation, according to a police source.

The investigators believe Yare was most likely the killer, but that all members of the gang were motivated by the desire to attack boats and claim ransoms through kidnapping.

The dramatic decline in piracy off the Somali coast means the trial could be the last in Europe for some time.

The European Union's military counter-piracy mission "Atalante" saw zero vessels pirated over the past three years, compared with a peak of 47 in 2010.

International naval patrols, increased security on boats and the jailing of over 1,000 pirates around the world have greatly reduced the threat, although experts warn that illegal fishing off Somalia's coast is again threatening local livelihoods and could push communities back to piracy.

The desire for ransoms means murders have been relatively rare in Somali piracy cases. This would be the first to feature a murder out of four that have come to trial in France.

In 2009, the French skipper of the "Tanit" was killed by friendly fire during a raid to rescue his ship from pirates.