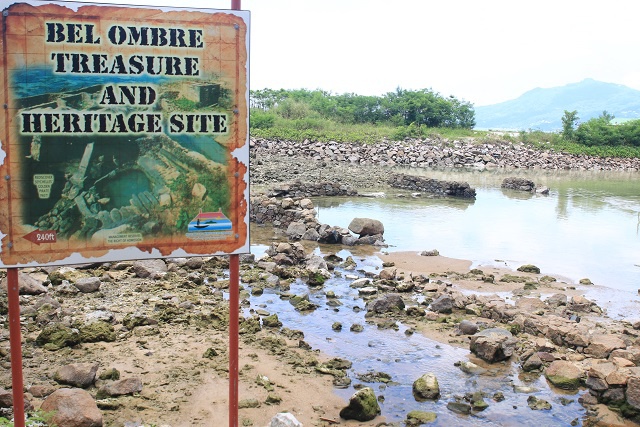 Partial view of the site at Belombre where the search for the hidden treasure of la Buse have been ongoing for nearly 70 years.  (Joe Laurence, Seychelles News Agency)

Convinced that the longtime treasure hunt is entering its final stage, John Cruise-Wilkins plans to start digging later this year after securing a license form the Seychelles government.

Cruise-Wilkins is confident that this time he will find the treasure.

“Basically after all the work, we have now pinned down the area where the cavern is and also the tunnels where we have to enter because there are a lot of tunnels crisscrossing the site,” Cruise-Wilkins told SNA.

The treasure buried at Bel Ombre, a district in the north of Seychelles’ main island Mahe, is believed to be that of pirate Olivier Le Vasseur also known as La Buse,who stole it from the Portuguese ship the Virgem do Cabo a week after Easter Sunday in April 1721.

Historical records state that the treasure buried in Seychelles, a group of 115 islands in the western Indian Ocean, includes a seven-foot high Cross of Goa made of solid gold and encrusted with precious stones, which took three strong men to carry. Cruise-Wilkins said the treasure is estimated to be worth $250 million.

John took over the search in 1988, a decade after his father Reginald Cruise-Wilkins, who started the quest in 1949, passed away.

It was not difficult for him to continue in his father’s footsteps as he used to work alongside his father as a kid during the holidays and weekends.

“I would come and work on the site and, in fact, my first wages I earned on site as a labourer with him. I developed an interest this way and when he died in 1977, the responsibility fell on me to keep the treasure hunt going,” says John.

He added that he felt he had to continue with the project out of an obligation to prove his father right but it has proven to mean much more.

“It’s not just to prove my father right but I’ve developed an interest in the treasure hunt itself. It is now a passion as I want to beat the pirate at his own game,” says John.

During the years, many equipment and methods have been used to facilitate this long search, he told SNA.

“We’ve used water pumps, drills and chisels, blasting and other tools. Recently, we’ve had to use excavators, not for the archaeological work but to help with huge boulders that have been put into place.”

The treasure hunter says the use of detection equipment, locators and detectors have been of little help on the terrain because there are minerals in the rocks and also iron pyrites called fool’s gold everywhere which can give false readings.

Findings so far have been one gold earring, one copper coin, human bones, pistols, musket balls, porcelain statuettes and other items. Most of the findings are in private collections in North America and Europe.

John told SNA that finding the treasure will be the achievement of a major goal in his life.

“It will be a sense of accomplishment and relief because as well as being an exciting adventure it has been a real burden as well, financial and otherwise and there has been a lot of pressure on my social and private life. I would have achieved one of my major goals in life.”

John recounts how his father got hooked on the treasure hunt after a chance meeting with Captain Goldvorg. The captain introduced Reginald to his colleague Rose Savy, a Mauritian married to a Seychellois owning the coastal property where the treasure is believed to be buried.

Savy found carvings and demarcations on rocks in early 1920 leading her to believe that they were pirate’s signs. She visited the Bibliotheque Nationale in France to confirm that the documents she had were indeed for La Buse. She later sold the documents to Reginald for $29 which was a small fortune at the time.

John says, “on the very first day, he (his father) found two demarcations including the keyhole, and when he looked at the documents, he noticed that they corresponded to the site.”

Reginald, a businessman then in Kenya in East Arica left and came back in 1949 to continue his search for the treasure. When he died in 1977, Reginald had done 80 percent of the work.

The hunt has so far been financed only by the Cruise-Wilkins family and shareholders from Kenya and UK.

Cruise-Wilkins is currently working on the tourism project for the treasure site. This will give visibility to the location and assist with the financing of the digging for the next three years.