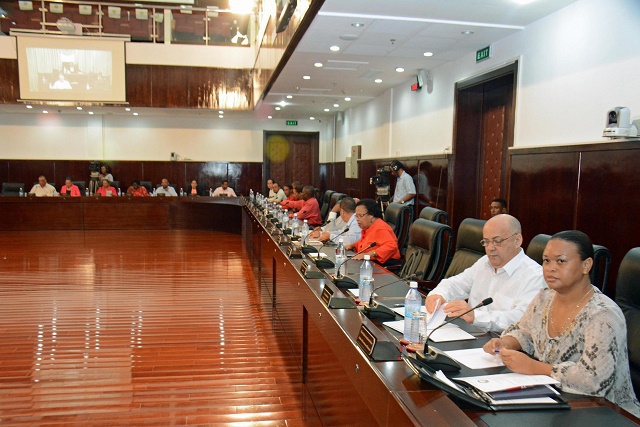 (Seychelles News Agency) - Members of the National Assembly approved a bill that ends the payment of compensation for former members and ministers who have not reached the age of retirement -- 63.

The bill, which was presented by Seychelles’ Vice-President Danny Faure on Tuesday and approved by Parliament on the same day, was first announced by President James Michel in his State of the Nation address in February.

President Michel said in his address that the people of Seychelles,an archipelago in the western Indian Ocean, was surprised to note that MNAs and ministers received a pension well before retirement age.

Members of the National Assembly, MNAs, gave their views on the bill before voting to cancel their benefits before the age of retirement.

"It is not normal that an MNA does two terms, and at a still young age receives a pension for the rest of his life. I am against this situation," said Charles Decommarmond, MNA of Cascade, a district in the east of the main island Mahe.

The leader of the opposition in the National Assembly, David Pierre, also voted for the new law.

"The majority of Seychellois think that MNAs and ministers must, like everyone else, receive their pension at the age of 63, and the Government has listened," said Pierre.

The decision of the National Assembly to cancel pension to members and ministers who have not yet reached 63 affects a dozen former members of the Seychelles National Party (SNP), who boycotted the parliamentary elections in 2011.

"This decision is a measure to punish those who are not in favour of James Michel because there are plenty of former members of the National Assembly and ministers who were receiving a pension and who are against him," said SNP leader Wavel Ramkalwan to SNA.

Ramkawalan said the abolition of the pension was not one of the proposals of the head of State in his manifesto for the presidential election in December.

The SNP leader added that the allowance of MNAs and ministers is an acquired right and according to him, one that should not be removed.

Ramkalawan said that this decision should apply to the new members of the National Assembly and ministers, and not to those already benefiting from this allowance.

"We have several members who will be affected, but what I think is the philosophy of this decision, because you are given and then it is removed," said the SNP leader.

When he presented the bill to the Assembly, Faure said he understands the position of members voting on a bill to stop an acquired right, but that things are not static.

"The Government believes that we must continue to examine the structure and principle, and implement an appropriate structure," said Faure.