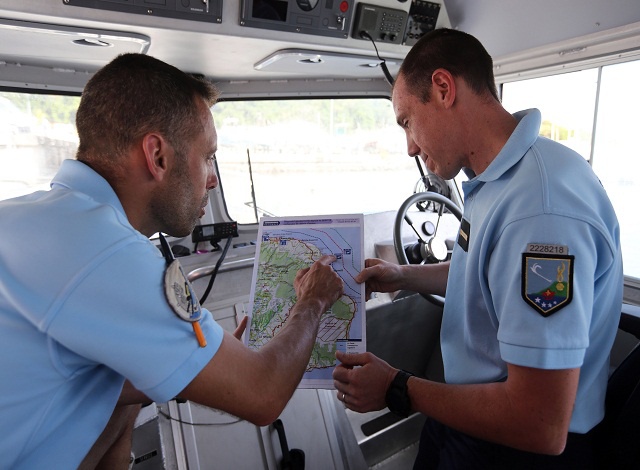 French maritime gendarmes look at a map indicating measures being undertaken in the search for wreckage from the missing MH370 plane at the marina of Saint-Marie on the French island of La Reunion on August 14, 2015. France will conduct air and sea searches off its Indian Ocean territory of Reunion until the start of next week for debris from missing flight MH370, the island's top official said on August 12. (AFP PHOTO / RICHARD BOUHET)

(AFP) - Australia's transport minister Sunday said new debris found on the Indian Ocean island of Mauritius would be examined to see if it belonged to MH370, just weeks after two Mozambique fragments were linked to the missing flight.

The debris was found on the Mauritius island of Rodrigues by a vacationing couple, news.com.au reported citing Reunion island website Clicanoo.

"The Malaysian government is working with officials from Mauritius to seek to take custody of the debris and arrange for its examination," Australian Transport Minister Darren Chester said.

"This debris is an item of interest however until the debris has been examined by experts it is not possible to ascertain its origin."

However, it remains unclear which country would examine the debris.

Aviation expert Don Thompson told the Australian news website the fragment could be the internal bulkhead from the Malaysia Airlines' Boeing 777 business or economy class cabin.

The latest discovery came less than two weeks after Australian and Malaysian authorities said two pieces of debris found in Mozambique were "almost certainly from MH370".

Another fragment picked up near Mossel Bay, a small town in Western Cape province in South Africa, would also be analysed to see if it came from MH370, South African officials said last month.

Before the latest discoveries, only a wing part recovered from the Indian Ocean island of Reunion, which lies east of Mozambique and neighbours Mauritius, had been confirmed as coming from the jet that disappeared two years ago.

Australia is leading the search for MH370 in the remote Indian Ocean, where the Kuala Lumpur-Beijing flight is believed to have diverted when it disappeared on March 8, 2014 carrying 239 passengers and crew.

The governments of Australia, China and Malaysia have said they will end the hunt when the target area is fully searched unless new, credible information emerges.