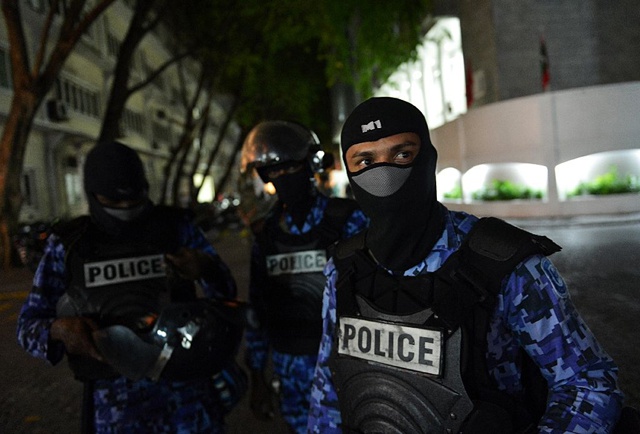 Police used pepper spray to break up Sunday's protest against the government's move to criminalise defamation, which media fear will be used to stifle freedom of speech. (AFP Photo/Ishara S. Kodikara)

The journalists, which the government said were released late Sunday, have been ordered to report to police for questioning over the demonstration held outside President Abdulla Yameen's office in the capital Male.

"We were told that we disobeyed police orders and they want to question us further," Zaheena Rasheed, an editor of the private Maldives Independent website, told AFP after she was released.

Police used pepper spray to break up Sunday's protest against the government's move to criminalise defamation, which media fear will be used to stifle freedom of speech. A draft bill proposes heavy fines and jail terms for offenders.

The government said in a statement the demonstration was broken up because journalists were gathered in "a high security zone, where protesting is prohibited", adding that the group was detained for 10 hours in total.

Political turmoil in the Maldives has dented its image as a peaceful paradise for well-heeled honeymooners. The Indian Ocean nation adopted multiparty democracy in 2008 after decades of autocratic rule, but has faced international criticism over a recent erosion of rights.

Rasheed said the released media met on Monday with US ambassador Atul Keshap, who was visiting from Sri Lanka where he is based.

The journalists raised concerns about press freedom in the nation, gripped by turmoil since the toppling of its first democratically elected leader Mohamed Nasheed in February 2012.

"Appreciated the opportunity to meet with Maldives journalists arrested during Sunday's protest," Keshap said on Twitter, posting a photo of himself with them.

Sunday's protesters were also attempting to pressure authorities to probe the mysterious disappearance of a reporter in 2014. The demonstrators also denounced a court decision to temporarily close the nation's oldest newspaper over an ownership dispute.

Nasheed, whose conviction and jailing last year on terror-related charges has been widely criticised by the West, is currently in Britain for medical treatment after being given prison leave.