Two shark species that should fight instead share Seychelles' lagoon; study tries to find out why 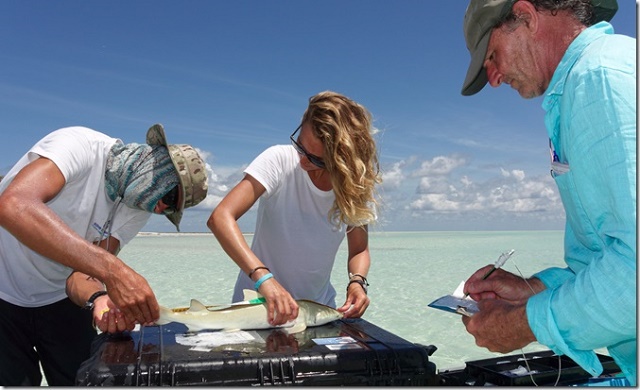 The Save our Seas team have to capture the sharks to obtain necessary data including their sizes, gender and stomach contents. (Michael Scholl, Save Our Seas Foundation)

(Seychelles News Agency) - The two shark species should mix together like oil and vinegar. Instead, they seem to be co-existing peacefully, and a study is under way to find out how and why.

In the shallow lagoon of St. Joseph, an atoll of the Amirantes group of Seychelles, the two species live together, share food and forage in the same nursery ground until they are old enough to leave the protective atoll for the surrounding reefs.

To solve the puzzle on how these two shark species can successfully coexist in St. Joseph Atoll, the Save Our Seas Foundation (SOSF), a not-for-profit organisation with a research station on D’Arros Island, has embarked on a three-year project.

The project leader, Ornella Weideli, says the only other places where juvenile blacktip reef sharks (Carchahinus melanopterus) and the sicklefin lemon sharks (Negaprion acutidens) are known to coexist are on Aldabra, an atoll in the Seychelles and Moorea, an island belonging to French Polynesia.

As young blacktip reef and sicklefin lemon sharks are ecologically and morphologically similar, their food and habitat preferences in the St. Joseph lagoon is expected to be alike, which could potentially lead to competition.

Sharks have slow growth rates, late sexual maturity, low reproduction and long gestation. Added to global threats of over-fishing, many shark species are assessed as ‘threatened’ by the International Union for the Conservation of Nature (IUCN).

“Previous studies have shown that female lemon and blacktip reef sharks return to the place where they were born to give birth to their young, similar to salmons,” said Weideli to SNA.

“When I first got to St. Joseph in November 2014, we had to learn where we [could] find these juvenile sharks, which method works best to catch them, and how we can collect tissue samples in the most efficient way,” said Weideli.

Compared to other islands of the Amirantes group, St Joseph is a ‘closed atoll’ that is seven kilometres long and has a depth of seven metres.

“It can only be entered with a small boat on a certain high tide; therefore, it provides a very protective and sheltered habitat for the inhabiting species.”

Throughout the first year of the study, 400 sharks of both species were collected and findings showed that the population sizes, as well as gender of both types of sharks, were healthy and well balanced. The home ranges of both species are similar and highly restricted within the atoll.

Stomach contents were also examined and Weideli says it’s still too early to compare the samples sizes from the first year is not yet large enough.

Two more sampling sessions will be held to coincide with the months that female shark gives birth in the second year of the study.

“The aim of the sampling season in April this year, will be to catch more sharks for genetic study, to finish the collection of the stomach samples, and to apply more active tracks,” says Weideli, adding that a second sampling will also be conducted later in the year.

St. Joseph Atoll is the second island in the outer island group of Seychelles to have a shark tagging and monitoring programme after of Aldabra.

Curieuse Island located 15 minutes from Praslin, the second most populated island of Seychelles also has a similar programme requiring volunteers to tag sharks and monitor them for several months.

All three sites are natural protective areas aimed at conserving these important habitats and breeding grounds for sharks.

If this is also true at St. Joseph Atoll, a long-term monitoring programme in an island which is remote and almost pristine and protected from human interference could help shed more lights on the mysteries of shark species in the Seychelles waters.