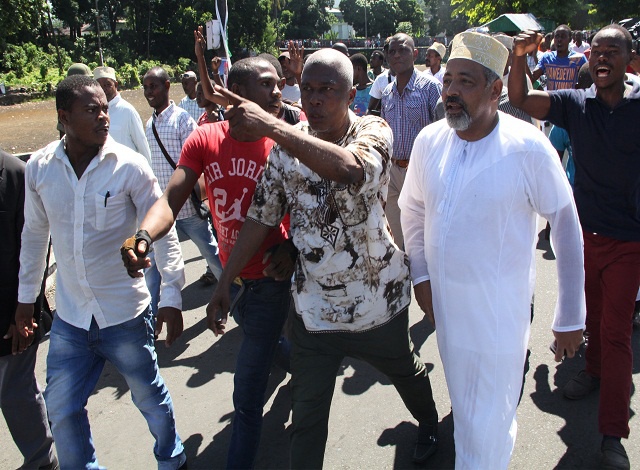 Said Ibrahim Fahami (R), one of the candidates to the first round of the presidential elections, takes part in a march in Moroni on February 27, 2016, to denounce alleged irregularities during the vote. Nineteen of the 25 candidates in the presidential elections in the Indian Ocean archipelago of the Comoros on February 25 challenged the results of the weekend vote and demanded a recount. (AFP)

(AFP) - Voters head to the polls in the Indian Ocean archipelago of the Comoros on Sunday in a likely face-off between the current vice president and a former coup leader who ruled the country for seven years.

The second round of the presidential election comes after Vice President Mohamed Ali Soilihi -- known as Mamadou -- won the first round in February with 17.88 percent of the vote.

The two other contenders are governor of Grande Comore island Mouigni Baraka, who garnered 15.62 percent in the first round, and 1999 coup leader Colonel Azali Assoumani, who took 15.10 percent.

Assoumani is seen as Mamadou's main rival after receiving the endorsement from the opposition Juwa party, which has no candidate in the second round.

The Juwa party split over the endorsement, and 15 high-ranking party officials resigned to rally behind Mamadou, who is viewed as the establishment choice.

If the election goes smoothly, results are expected within three days in the race to succeed outgoing President Ikililou Dhoinine.

A Constitutional Court ruling in March upheld the first-round results after 19 of the 25 candidates alleged fraud.

The first round took place only on Grand Comore island, in accordance with electoral rules that ensure the president is chosen on a rotating basis from the three main islands.

The system was established in 2001 after more than 20 coups or attempted coups in the years following independence from France in 1975.

Dhoinine's completion of his five-year term has been seen as a sign of growing stability in the Comoros, which has a population of about 770,000.

The islands, situated between Madagascar and Mozambique, suffer dire poverty but export some vanilla, cloves and ylang-ylang perfume essence.