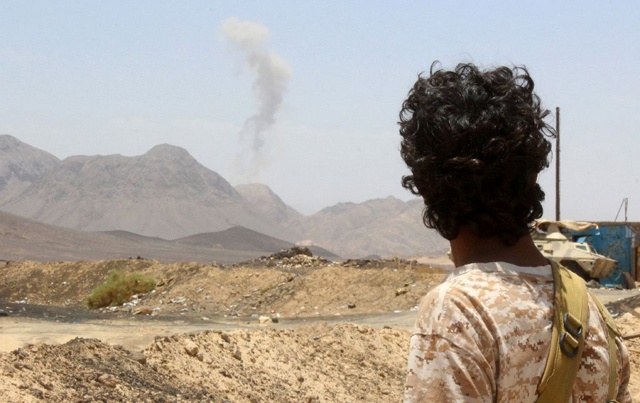 A Yemeni fighter loyal to exiled President Abedrabbo Mansour Hadi looks at smoke rising in the distance in the Sirwah area, in Marib province, on April 10, 2016 (AFP Photo/Nabil Hassan)

(AFP) - All sides in Yemen's year-long war pledged to honour a UN-brokered ceasefire that took effect at midnight Sunday, adding to cautious optimism ahead of new talks to reach a lasting peace deal.

The chief of staff of forces loyal to President Abedrabbo Mansour Hadi confirmed "the ceasefire has taken effect" at midnight (2100 GMT), despite deadly clashes in regions around the capital Sanaa in the lead up to the deadline.

Fighting over the past year has killed thousands, displaced 2.4 million, and drawn in Yemen's neighbours, but there are renewed hopes that the new ceasefire will form the cornerstone of a long-lasting peace deal that can be hammered out between the country's warring parties from April 18 in Kuwait.

General Mohamed Ali al-Makdashi told reporters that "we are going to respect it... unless the Huthi rebels violate it".

Three earlier attempts at ceasefires collapsed after a Saudi-led coalition in March last year began air strikes to support the Hadi government and push back the Zaidi Shiite Huthis who overran the capital Sanaa in September 2014 before advancing to other regions.

Chaos and misery have ruled the Arabian Peninsula country since, while pressure has built for an end to the violence.

The Iran-backed Huthis, along with allied troops loyal to ex-president Ali Abdullah Saleh, sent the United Nations a letter committing to "cease land, sea and air military operations" throughout Yemen, according to a communique carried by the rebel-run Saba news agency.

Foreign Minister Abdel Malek al-Mekhlafi said Hadi's government had also given "guarantees to the UN that it will maintain the truce".

UN special envoy Ismail Ould Cheikh Ahmed welcomed the ceasefire and called on all parties to respect it.

"I ask all the parties and the international community to remain steadfast in support for this cessation of hostilities to be a first step in Yemen's return to peace," he said. "This is critical, urgent and much needed. Yemen cannot afford the loss of more lives."

In contrast to previous ceasefire attempts, some Huthi leaders met with loyalist troops on a joint committee to make sure both sides comply with the truce, coalition spokesman Brigadier General Ahmed al-Assiri told AFP.

"And they will monitor all the personnel on the ground, to not violate the ceasefire," he said.

In the lead-up to the truce, fighting raged in regions outside Sanaa, while the rebel-held city itself, which has been regularly bombed by coalition warplanes, was quiet.

Rebels and their allies exchanged mortar and artillery fire with pro-Hadi forces in Sarwah region of Marib province east of Sanaa, an AFP correspondent said.

A pro-Hadi commander in Sarwah, Lieutenant Colonel Abdullah Hasan, told AFP that four of his men were killed in the shelling.

There were also clashes in Nihm northeast of Sanaa, witnesses said.

The UN special envoy announced last month that the ceasefire would be brokered ahead of the peace talks in Kuwait, but it was only agreed by the warring sides after months of shuttle diplomacy.

"We will go to the consultations (in Kuwait) to achieve peace," Hadi reiterated on Saturday, insisting that the rebels must commit to UN Security Council Resolution 2216 calling for their withdrawal from seized territory and disarmament.

Earlier negotiations collapsed but analysts are more optimistic this time after mediation efforts largely silenced guns along Yemen's border with Saudi Arabia, and a Huthi delegation visited Riyadh for talks.

"For the first time, the groups that can end major military operations, particularly the Saudis and the Huthis, appear to be more willing to do so," said April Longley Alley, a Yemen specialist at the International Crisis Group.

"Even if major combat ends, the road to peace in Yemen will be long and difficult and internal conflict is likely to continue for some time," she added.

Yemenis appeared sceptical of any lasting impact from the ceasefire.

"I do not expect the truce to succeed," said Zayed al-Qaisi, a resident of Marib who doubted the Huthi commitment to the agreement.

"Even the government cannot force us to respect a ceasefire as we have not liberated our territories," said Qaisi, armed with a Kalashnikov rifle like most tribesmen in Yemen, referring to areas seized by the rebels.

In the capital, others doubted that Riyadh would commit to the truce.

According to the UN, more than 6,300 people have been killed in impoverished Yemen since March last year -- around half of them civilians.