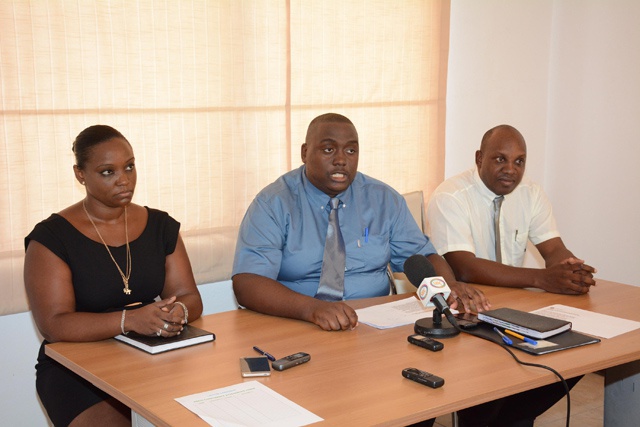 Martin Aglae (centre) is the leader of a new party, ‘Linyon Sanzman’ or Union for Change gearing up to contest the upcoming legislative election in Seychelles. (Joena Bonnelame, Seychelles News Agency)

(Seychelles News Agency) - Parliamentary elections in Seychelles should take place in about five months and the opposition parties are intensifying preparations.

A Seychellois opposition activist, Martin Aglae, has registered a new party -- ‘Linyon Sanzman,’ or Union for Change -- to contest the 2016 legislative elections.

The registration of Aglae’s party has been received with much surprise and discontent by some other opposition parties, including the Seychelles National Party (SNP), Lalyans Seselwa (the Seychellois Alliance) and the Seychelles Party for Social Justice and Democracy, as they also wanted to register a political party bearing the same name.

The parties had rallied under the banner of Linyon Sanzman to contest the second round of the presidential election in December 2015 in the 115-island archipelago in the western Indian Ocean. However, the name Linyon Sanzman was not formally registered at the Electoral Commission’s office.

The Electoral Commission explained in a statement issued on Friday that guided by the Political Parties (Registration and Regulation) Act it had “considered the application that was submitted first, and that is the application of Martin Aglae.”

Aglae is not new on the Seychelles political scene. He made his debut at the age of 20 in 2011 when he stood as a candidate for the Popular Democratic Movement (PDM) for La Digue island. He obtained 63 votes in the election.

He has since been involved in other opposition parties including the Seychelles National Party before deciding to register his own party saying his aim is to remove the ruling ‘Parti Lepep’ from power and unite the opposition parties.

"I'm not here to stay, I'm just the person who has created Linyon Sanzman. Now we have to sit down and find a way to move forward," Aglae said to SNA adding that he would not like to see the SNP leader Wavel Ramkalawan as part of a coalition.

Aglae said he thinks Ramkalawan has failed to unite the opposition.

The leader of Linyon Sanzman says his party is ready for the upcoming parliamentary elections but that he would like to meet with the other opposition parties before making any announcements.

"We have taken the decision to negotiate with them on how to proceed into the next parliamentary elections as Wavel Ramkalawan is not involved in the Seychellois Democratic Alliance [a newly registered party],” Aglae said to SNA.

He asserts that he is more drawn towards the political aspirations of Alexia Amesbury, leader and founder of the Seychelles Party for Social Justice and Democracy also the first Seychellois woman to contest a presidential election in 2015.

Aglae has expressed his wish to see the departure of the ruling Parti Lepep, whose leader, President James Michel, was declared winner of the 2015 presidential elections with 50.15 percent of the votes.

"To us the Parti Lepep has failed to put measures in place to ensure that the Seychellois population lives in dignity. We believe that everyone should be given equal opportunities," he added.

In the last National Assembly elections held in May 2011, all 25 directly elected seats were won by  ‘Parti Lepep,’ which also holds six of the seven proportionately elected seats.

The leader of the opposition in the National Assembly, David Pierre, currently holds the seventh proportional seat in the house. Pierre’s Party was the only contender alongside the ruling Parti Lepep, as the main opposition party, SNP, decided to boycott the 2011 elections.