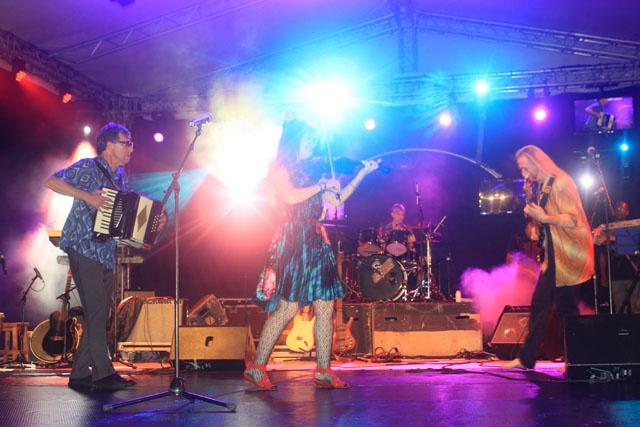 Lisa Haley with her group the ZydeKats were among international delegations that featured at the opening ceremony of the 2014 Carnaval International de Victoria (Joe, Laurence, Seychelles News Agency)

(Seychelles News Agency) - The world's number one international TV news channel CNN International will air the vibrant colours, costumes and culture that were displayed during the fourth edition of the 'Carnaval International de Victoria' in the Seychelles islands last month.

The American network's Cable News Channel worldwide programme will air its show on the Seychelles Carnival today Friday May 16 at 09.30 and 16.30 GMT or 1.30pm and 8.30 pm Seychelles time.

This will feature in the Inside Africa segment.

CNN producer and camerawoman Mary Rogers and CNN correspondent Ian Lee were amongst the record number of 151 international journalists from nearly 84 media houses who made the trip to the Indian Ocean archipelago to share the Carnaval International de Victoria with the world.

The US was amongst some 26 international delegations present at this year’s carnival, represented by Michael Quinn and his group Bourbon Kings as well as Lisa Haley with her group the ZydeKats.

It was against the backdrop of the Coral Strand Hotel on Beau Vallon Beach that SNA correspondent Joseph Samy met Cajun and Zydeco music icon Lisa Haley conversing hilariously with CNN’s Mary Rogers before leaving Seychelles.

It was in the shade of a Takamaka tree that she told us her odyssey to the island nation with her group the ZydeKats.

“We were asked to come to Seychelles as Musical Ambassadors by the US State Department because Seychelles felt that more Americans should know about the Seychelles… soooo beautiful here... However the most beautiful aspect of this country remains “Les Seychellois” - “the people,” said Liza Haley.

J.S:  Tell us about your music?

Lisa Haley: “This music we play is about 140 years old and my adopted father “mon pere adoptif” was Joe Simion from the Simion family from Louisiana and he was a Cajun accordion legend. None of his natural children wanted to play music except his son who played the drums. As an adopted child he taught me all the traditional Simion family songs for which I am forever grateful. My family moved to Louisiana in 1718 to escape the smallpox epidemic in Ireland. Then the French 9 years later came to settle. So the Cajun music is a traditional mix of French Celtic, Irish Celtic, Latin, Spanish and Americana. That was Cajun music and it was only in South West Louisiana for many years and no outside influences came in. Every family had their own little style and we all played the same kind of music. About 60 years later R&B and the blues started coming into New Orleans and Jazz and Haitians were brought to New Orleans to harvest the new cash crop, sugar cane, so they brought in the Haitian music. R&B and Blues and that mixed with the Cajun music and that was then called Zydeco. So we have 2 kinds of music in South West Louisiana today, Cajun music and Zydeco and we sing in English and French.”

J.S I guess music is your life?

J.S How did the Seychellois react to your performances?

Lisa Haley: “The Seychellois just danced away and cheered. We were overwhelmed... Our music is close to them. The Seychellois is a joyful people. With my band “The Zydekats” we are already in the process of writing a song about the Seychelles because the Seychellois people have truly moved us.”

The programme will be availble online once it has been aired.