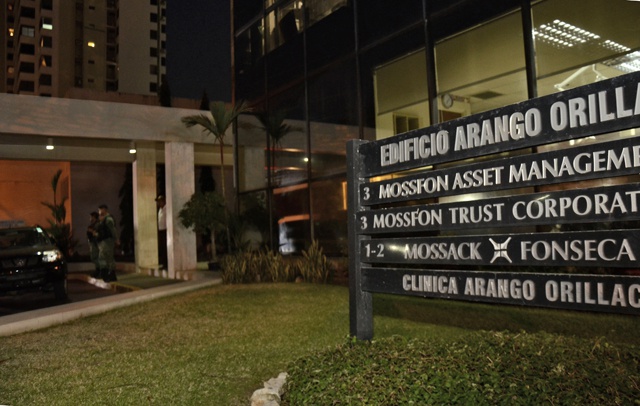 Police stand guard outside the Mossack Fonseca law firm offices in Panama City during a raid on April 12, 2016. Police on Tuesday raided the headquarters of the Panamanian law firm whose leaked Panama Papers revealed how the world's wealthy and powerful used offshore companies to stash assets. (Ed Grimaldo/AFP)

(AFP) - Police on Tuesday raided the headquarters of the Panamanian law firm whose leaked Panama Papers revealed how the world's wealthy and powerful used offshore companies to stash assets.

Police with an organized crime unit carried out the raid at Mossack Fonseca "with no incident or interference," prosecutors said in a statement, adding that searches would take place at the firm's Panama City headquarters and its branches.

The Panama Papers, centered on a huge cache of documents pilfered digitally from the Mossack Fonseca, has had repercussions around the world.

Russian President Vladimir Putin has sought to divert attention from his entourage by claiming it is all a US plot against him.

China has been censoring online forums and media to try to prevent the names of relatives close to the leadership from circulating.

And wealthy citizens in Australia, France, India, Mexico, Peru, Spain and elsewhere face probes over suspected tax avoidance after their names figured in some of the 11.5 million documents.

British Prime Minister David Cameron's image has taken a beating from the delay in revealing that he held shares in his late father's offshore fund and received money from his parents that may have skirted inheritance tax.