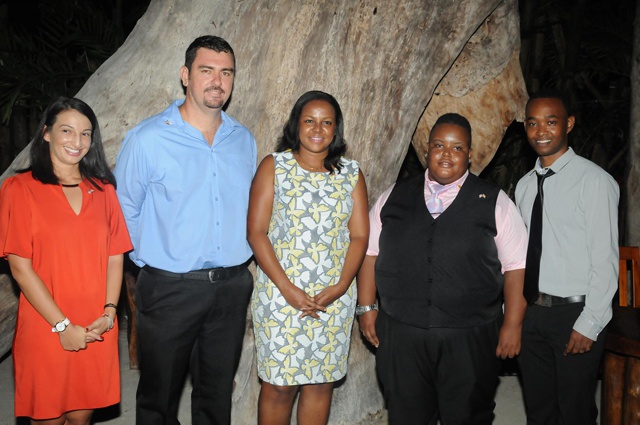 (Seychelles News Agency) - Become a better leader. That is one of the many expectations of one Seychellois heading for the Mandela Washington Fellowship 2016 in the United States in June.

Karine Rassool is among five young Seychellois revealed by the US Embassy on Wednesday evening as successful applicants from the 115-island archipelago in the western Indian Ocean.

The announcement was made during an event held at Beau Vallon, in the north of the main Seychelles island, Mahé.

Rassool is an economist working for the Seychelles Fishing Authority, a part-time lecturer at the University of Seychelles and active member of an NGO, SIDS Youth Aims Hub (SYAH) – Seychelles which is focussed on promoting sustainable development.

She told the media that she is keen on meeting individuals sharing the same aspirations as she and to be inspired by them.

Initiated by the US President Barrack Obama during a trip to South Africa in 2013, the Washington Fellowship for young African leaders falls under the Young African Leaders Initiative (YALI), which Obama launched in 2010.

The programme is aimed at empowering participants to make a difference in their home countries. It targets individuals in the 25 to 35 year range.

From 500 participants each year in 2014 and 2015, the programme is doubling the number of participants starting this year.

The U.S. Embassy’s Naval Criminal Intelligence Service Agency (NCIS) Agent Jennifer Cartaino who officially announced the selected candidates from Seychelles described them as “capable individuals with leadership qualities who have accomplished much both at a professional and individual level.”

“It is with great anticipation that we prepare to send you off and see the ways in which you will expand your horizons, and come back with ideas to build up your country,” said Cartaino.

Mervin Pool, whose last chance to take part in the programme was in 2016 due to the age criteria, is very much interested in pioneering the concept of social entrepreneurship in Seychelles.

“One of the greatest riches of Africa is its people because the incredible power of the human resource of Africa cannot be measured,” said Mervin who has also been involved in full-time Christian evangelism for the last 14 years.

The other male participant from Seychelles is Aaron Bonnelame, an IT technician who is also involved in politics as a member of the Seychelles National Party, one of the opposition parties in the island nation.

He said that his reason for applying to undertake the leadership training is “to bring about positive changes in myself, broadening my knowledge, reinforcing my capabilities and reaching for my full potential as a young political leader.”

The two other participants from Seychelles are a medical officer, Vanessa Telemaque, who is keen on using the knowledge she will acquire to train her peers, and Fabianna Bonne, whose interest lies in advocating workers’ rights and the rights of the Lesbian, gay, bisexual, transgender and intersex community. Bonne is the founder of the first and only advocacy group for LGBTI rights in Seychelles.

The 5 Seychellois were chosen among thousands who applied from across the Africa continent this year, although SNA could not confirm the number of applications received.

The 1,000 successful applicants will spend six weeks at various universities in the US as of mid-June.

Their placement will be based on their preferred choice of training ranging from Business and Entrepreneurship, Civic Leadership, or Public Management. A pilot for a specialized Institute on energy is a new element in 2016.

Participants can also opt for an additional six weeks’ internship which will be the case for at least one of the Seychellois participants, Fabianna Bonne.

The highlight of the Mandela Washington Fellowship is when all participants converge to Washington D.C. to meet with President Barrack Obama during a three-day presidential summit.

Five Seychellois have already taken part in the US training programme; three went in 2014 and two in 2015.