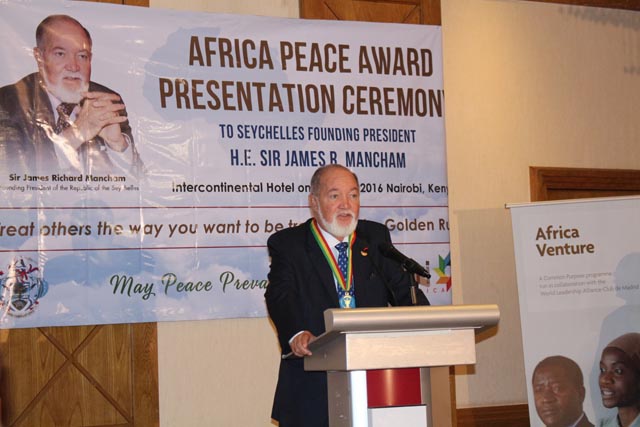 (Seychelles News Agency) - An indication that efforts made to promote peace and reconciliation locally and internationally ‘have not gone unnoticed.'

That is how a former Seychelles President views the Africa Peace Award 2016 presented to him this week.

James Mancham spoke to SNA on Sunday ahead of his trip to Kenya to collect the award.

“When you realise the size of Africa, and the number of people who are inter-playing on the political platform [to] have been singled out to receive the Africa Peace Award for the year 2016 is something that has overwhelmed me,” said Mancham

The recognition was attributed to the former president at the beginning of the year by the United Religions Initiatives (URI)-Africa, which is part of a global network promoting a culture of peace.

However it was on Tuesday that he was presented with the award during a forum on African Leadership in Kenya organised by Common Purpose and World Leadership Alliance-Club de Madrid.

Mancham has highlighted some of his involvement in Africa which he believes has contributed to his recognition.

“I went over to Rwanda and to Kinshasa to try and bring the warring parties together. In Kenya I already got the ‘Kenya Youth Trophy’, trying to bridge the gap between tribalism which exists there. I represented the African Union at the Egyptian presidential elections. I guess all these participations were observed and studied,” he said to SNA.

“This sort of effort that we do are not monetarily rewarding, but at the end of the day I believe leaving a good legacy behind is more important than leaving just a lot of money,” added.

According to a statement released from Mancham’s office on Thursday, he was presented with a trophy in the shape of the continent of Africa during a Tuesday ceremony.

“The final decoration came by way of the gold medal as a symbol of peace-leader of the year,” says the statement, which also speaks of congratulatory messages Mancham has received from personalities worldwide including from Seychelles President James Michel.

In an article published in the newspaper Seychelles Nation last week the Regional Director of URI-Africa, Ambassador Mussie Hailu was quoted as saying that: “The award is  presented to Sir James Mancham, founding president of Seychelles, in appreciation and acknowledgment of his tireless effort  in promoting a culture of peace, inter-religious and inter-cultural ... and for his visionary and extraordinary leadership in building the  image of Africa globally."

Mancham was the first president after the 115-island archipelago in the western Indian Ocean gained independence from Britain. He was ousted by his prime minister, France Albert Rene, in a coup in 1977, and later returned to Seychelles in 1992 to head the Democratic Party.

Mancham left politics in 2005 and has since become an advocate of peace and reconciliation at international gatherings.