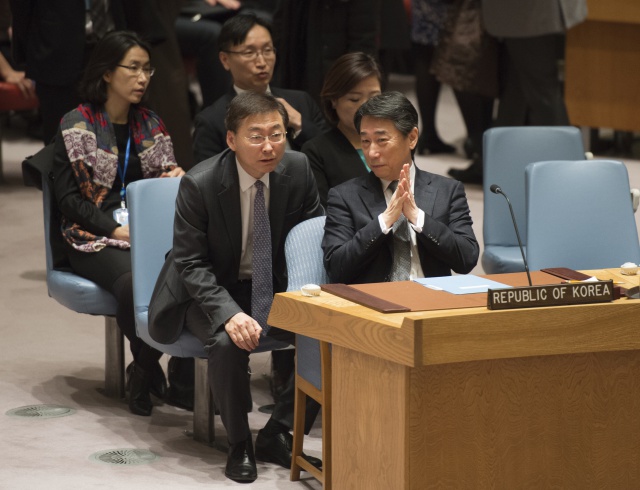 South Korea's delegation to the UN lead by Ambassador Oh Joon (R) talkS before a vote during a United Nations Security Council meeting on sanctions against North Korea March 2, 2016 at the United Nations in New York.
(Don EMMERT / AFP)

(AFP) - The UN Security Council strongly condemned North Korea's test-firing of a missile on Friday, saying that the launch violated UN resolutions even if it was a failure.

In a unanimous statement, the council said it would closely monitor the situation and was ready to "take further significant measures" against the reclusive state.

"Although the DPRK's ballistic missile launch was a failure, this attempt constituted a clear violation of United Nations Security Council resolutions," the statement said.

Last month, the council imposed its toughest sanctions to date on North Korea after Pyongyang carried out its fourth nuclear test and fired a rocket that was widely seen as a disguised ballistic missile test.

Since the adoption of the new sweeping sanctions, North Korea has carried out at least two sets of ballistic missile launches that the council has condemned.

During Friday's attempt, the missile disappeared from tracking radar a few seconds after its launch and was believed to have exploded in midair, according to a Seoul intelligence official quoted by the Yonhap news agency.

Asked about the failed launch, UN spokesman Farhan Haq said: "We certainly are aware of the recent reports of activity by the Democratic People's Republic of Korea, which is alarming."

"We once again call on the Democratic People's Republic of Korea for restraint."

The launch took place on the birthday of founding leader Kim Il-Sung.

In Washington, a Pentagon official said the test-firing of what appeared to be a medium-range missile ended in catastrophic failure.

"I can tell you it was a fiery, catastrophic attempt at a launch that was not successful," Navy Captain Jeff Davis told reporters.

The missile was likely "road-mobile" -- or transportable -- because it had been launched from an area on the east coast of North Korea where tests don't normally occur, Davis said.

Recent intelligence reports suggested North Korea was preparing for the first-ever flight test of its Musudan missile, which is believed to be capable of striking US bases on the Pacific island of Guam.

Davis said the latest launch attempt would surely factor into conversations between Washington and Seoul about the deployment to South Korea of the sophisticated THAAD system -- Theater High Altitude Area Defense System.

"This is something that's being done because of North Korea's continued provocations," he said.