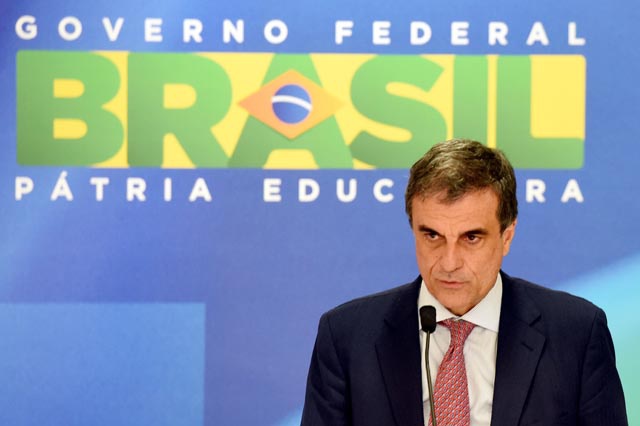 Brazilian General Attorney Jose Eduardo Cardozo speaks during a press conference at Planalto Palace in Brasilia, where he criticizes the voting results at the Lower House which allowed the impeachment of President Dilma Rousseff to go ahead, early on April 18, 2016. (EVARISTO SA/AFP)

Opposition deputies in the lower house of Congress needed 342 of the 513 votes, or a two thirds majority, to send Rousseff to the Senate, which will now decide whether to open a trial. They got there near midnight on Sunday after five hours of voting.

Wild cheering and a burst of confetti erupted from opposition ranks at the 342nd vote, countered by furious jeering from Rousseff allies in a snapshot of the radical and bitter mood consuming Brazil just four months before Rio de Janeiro hosts the Olympics.

Presidential chief of staff Jacques Wagner accused deputies of voting for impeachment without proving that Rousseff, who is accused of illegally manipulating budget figures, had committed a serious crime.

"In this way, the Chamber of Deputies is threatening to interrupt 30 years of democracy in the country," he said, referring to the end of a military dictatorship in 1985.

"It was a coup against democracy," Rousseff's attorney general, Jose Eduardo Cardozo, said.

Cardozo said that the leftist leader, who was imprisoned and tortured under military rule, would give her first public reaction on Monday.

There was expected to be a euphoric reaction from the financial markets which have been betting on a Rousseff exit and the advent of a more business-friendly government to kickstart Brazil's flailing economy.

Outside Congress, where tens of thousands of people were watching giant TV screens, the split was echoed on a mass scale -- with opposition supporters partying and Rousseff loyalists in despair.

"I am happy, happy, happy. I spent a year demonstrating in hope that Dilma would be brought down," said retiree Maristela de Melo, 63.

But Rousseff supporter Mariana Santos, 23, burst into tears, saying the vote was "a disgrace for our country."

Several thousand police stood by and the rival camps were separated by a long metal wall.

If, as many expect, the Senate goes on to impeach the leftist president, Vice President Michel Temer -- who abandoned Rousseff to become a key opponent -- will assume power.

"Now Brazil needs to climb out of the bottom of the well and we have to resolve the situation as quickly as possible," he said. "The Senate should move rapidly."

But opposition celebrations could be short lived, analysts say.

Temer would inherit a country wallowing in its deepest recession in decades and a dysfunctional political scene where Rousseff's Workers' Party vows revenge.

"It will not be easy" for Temer, said Andre Cesar, an independent political analyst. "It will be a nightmare."

Rousseff, 68, is accused of illegal accounting maneuvers to mask government shortfalls during her 2014 reelection. Many Brazilians also hold her responsible for the economic mess and a massive corruption scandal centered on state oil company Petrobras, a toxic record that has left her government with 10 percent approval ratings.

Now the decision by the lower house moves the matter to the Senate, which is expected to vote in May on whether to open a trial. In case of a green light there -- which experts consider almost certain -- Rousseff would step down for up to 180 days while the trial got under way.

If the Senate then voted by a two-thirds majority for impeachment, Rousseff would be ousted. Temer would stay on until elections in 2018.

But a senior Rousseff ally said there would be no surrender.

"The coup plotters have won here in the house," said Jose Guimaraes, leader of the Workers' Party in the lower house of Congress.

"President Dilma (Rousseff's) government recognizes this temporary defeat but that does not mean that the war is over," Guimaraes said. "The fight will continue in the streets and in the Senate."

- Street politics -
Huge opposition rallies involving hundreds of thousands of people over the last months have played a big role in turning pressure against Rousseff into an unstoppable avalanche.

Anger on the streets could again play a role as the crisis enters ever higher stakes.

"Whoever loses will keep protesting in the streets," he said. "What's certain is that the crisis will not end today."

However, on Sunday the crowds were peaceful so far.

In Brasilia, about 53,000 pro-impeachment demonstrators massed outside Congress, according to a police count. About 26,000 turned out on the pro-Rousseff side of the metal fence, police said.

In Rio de Janeiro about 3,000 people each from the two sides demonstrated at separate time slots next to Copacabana beach.

The atmosphere even became festive, with a funk band singing in Rio and protesters blowing trumpets and vuvuzelas, as if at a football game, in Brasilia.

In Sao Paulo, the financial center, thousands of pro-impeachment supporters thronged the central Paulista Avenue, many of them in the country's green and yellow national football shirts.