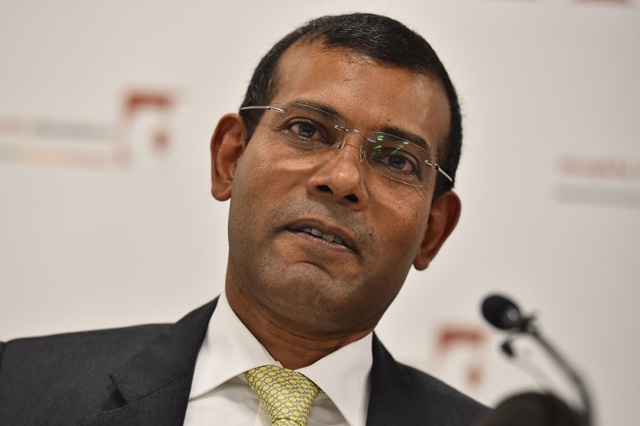 (AFP) - The Maldives on Tuesday cancelled the prison leave granted to jailed former president Mohamed Nasheed to undergo medical treatment in London and said it expected him to return "expediently".

The 48-year-old former leader was jailed last year on controversial terrorism charges, but was allowed to travel to Britain in January for treatment after he fell ill in jail.

The government initially extended Nasheed's prison leave to allow him to undergo surgery, but revoked the extension almost immediately, although it has not given him a deadline to return.

"The former president was given an extension to undergo surgery. As his lawyers have confirmed that there is no surgery scheduled, the extension was cancelled," it said in a statement.

"The government expects he will return expediently."

Nasheed became the first democratically elected president of the Maldives in 2008 and served for four years before he was toppled in what he called a coup backed by the military and police.

He was jailed on terrorism charges relating to the arrest of an allegedly corrupt judge in 2012, when he was still in power.

The Maldives has suffered prolonged political unrest in recent years, seriously denting its reputation as an upmarket tourist destination.

Nasheed's lawyer Hassan Latheef said his client's situation had been made clear to the authorities, accusing them of breaching Nasheed's right to privacy.

Nasheed, whose legal team includes the high-profile human rights lawyer Amal Clooney, told reporters in January that he had not yet decided whether to return to the Maldives to resume his 13-year jail sentence.

He was accorded a red carpet welcome and received by Prime Minister David Cameron after arriving in Britain in January in a deal brokered by the former colonial power along with Sri Lanka and India.