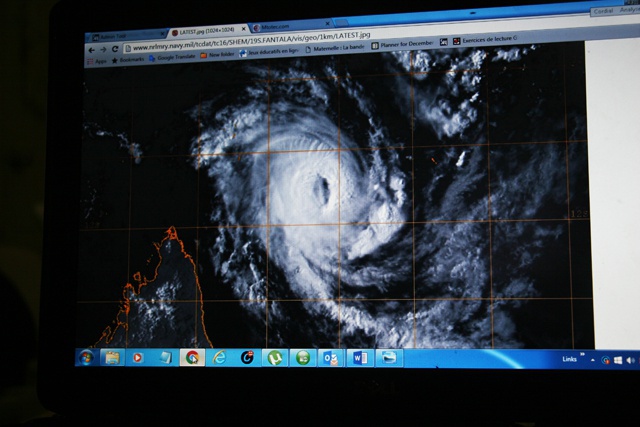 Significant damages were reported on Farquhar island Monday after Fantala made landfall Sunday evening with winds up to 350km/h. Only four cyclone-proof facilities on the island -- which lies more than 700 kilometers south of the Seychelles main island, Mahe --survived the storm.

Dogley said that the disaster declaration will help Seychelles to seek not only local but also international assistance for rebuilding efforts.

“Luckily the intensity was a bit less the second time, but [Farquhar] still experienced strong winds from 9pm to up to around three-four o'clock in the morning,” said Savy.

Savy told the media that the company’s staff on the island who have been taking refuge in the cyclone-proof facilities are safe, adding that they have sufficient food and fuel.

They have been keeping contact with him through a standby satellite phone system.

“The staff have had the opportunity to walk around a little bit and they say the damage is very, very extensive, especially to the environment, the trees,” said Savy.

IDC, a parastatal company which manages some of the outer islands of the archipelago, has decided to reduce the number of its employees on Farquhar especially the older workers, the women and others who may have health issues.

The IDC is expected on Friday to provide the first pictures showing the extent of the devastation on the island.

A flight to Farquhar originally planned for Thursday has now been postponed by a day while a boat with supplies that was scheduled to leave for the island on Wednesday has also not done so as the sea conditions remains rough.

The authorities remain on alert since weather models show that Farquhar and its neighbouring islands won't be in the clear until Tuesday or Wednesday next week.

Fantala is currently moving southeast and is expected to gradually change course and move north towards Madagascar and could potentially come back and hit Farquhar and the surrounding islands a third time, said Wills Agricole, the Principal Secretary for Energy and Climate Change.

“But of course we have to be careful with these models and we have to be on the alert in case the cyclone comes back in the Seychelles waters,” said Agricole.

IDC will be taking a decision on whether there will be a need for a partial evacuation of personnel on Astove, Assumption and potentially Aldabra islands, which could be affected along with Cosmoledo if Fantala does strike a third time.

“That decision will probably be taken in the next 48 hours depending on what happens with the cyclone because the modelling does not necessarily means it will happen because there are many factors that can cause a cyclone to change direction, intensify or break up,” said Savy.

Once the situation around the southern outer islands goes back to normal, work will have to begin to assess the extent of damages caused so that the necessary resources could be mobilised to repair infrastructures.

Dogley said the island can mobilize local and international assistance for the hard-hit islands with the newly declared disaster designation.

“For example we have an arrangement with the World Bank where we have an insurance policy and to get funding you have to declare the disaster areas then do the assessment to see what has been lost and how much it will cost to restore the essential facilities and services,” said Dogley.

Seychelles lies outside of the cyclonic belt, although the most southerly islands of the archipelago do experience strong winds.

The tropical cyclone season of the southwest Indian ocean starts from November 15 to April 30 but for Mauritius and Seychelles the vulnerability period lasts until May 15.

As for Farquhar, the island has been hit by cyclones previously in 1956 and also in 2006. ‘Bondo’ hit in 2006 although it caused less damages than Fantala as it carried winds up to 225km/h compared to the 350km/h experienced this year.

It was because of Bondo that cyclone-proof facilities were built on the island, and Minister Dogley has said that such measures will have to be taken into consideration as the damages of the present disaster are evaluated.

“What we need to do is to sit down and see how to be more resilient, to rethink about how we design infrastructures for the islands affected, how to exist alongside cyclones which before were not a threat to the islands,” said Dogley.

The passage of cyclone Fantala has once again highlighted the vulnerability of the Seychelles, a 115-island archipelago in the face of climate change.

Wills Agricole said that the country will be further highlighting this on April 22 when it signs the Paris Agreement document.