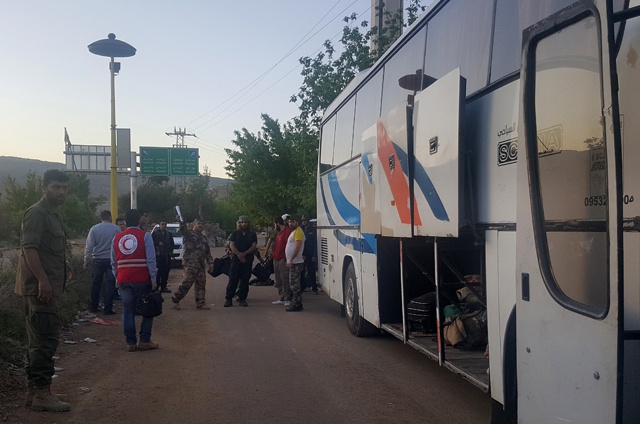 Syrians prepare to board as bus to leave the besieged town of Madaya, on April 20, 2016 during an operation in cooperation with the United Nations to evacuate hundreds of wounded people from besieged Syrian towns. (Maher AL MOUNES / AFP)

(AFP) - Hundreds of sick or wounded Syrians and their families were being evacuated from besieged rebel- and regime-held towns for treatment Thursday as relief efforts intensified even as peace talks falter.

The evacuees, who were "in urgent need of life-saving medical attention," according to the United Nations, were bussed out of their enclaves late on Wednesday in a joint operation with the Syrian Arab Red Crescent.

In a carefully synchronised operation, they were all brought to a staging area in a rebel-held part of central Syria at dawn on Thursday before being transported on for treatment, the Syrian Observatory for Human Rights said.

Exactly 250 of the evacuees were brought out of the besieged rebel-held towns of Madaya and Zabadani, northwest of Damascus.

The same number were evacuated from the besieged government-held towns of Fuaa and Kafraya, southwest of Aleppo.

The Observatory said some of the pro-government evacuees were already beginning to arrive in the regime heartland province of Latakia on the Mediterranean coast.

The evacuees from Madaya and Zabadani were being taken for treatment in the rebel-held province of Idlib on the Turkish border.

The staging area at Qalaat al-Madiq, a medieval castle in central Hama province, has been used in similar evacuation operations in the past.

In December, rebels who quit the last opposition-held district of the central city of Homes were bussed out to Idlib province via Qalaat al-Madiq.

Aid deliveries to Fuaa, Kafraya, Madaya, and Zabadani always occur simultaneously and in equal amounts, and a similar stipulation applied for those being evacuated.

More than four million in Syria live in besieged or hard-to-reach areas, with limited or no access to food or medical supplies.

The UN has long pressed Damascus to grant unrestricted access to these areas, and has asked all sides to end sieges.

The dire humanitarian situation has been a major obstacle to progress in fragile peace talks in Geneva between the government and the opposition High Negotiations Committee.

Earlier this week, the HNC walked out of the talks, saying it could not remain in Switzerland while Syrians were dying on a daily basis.