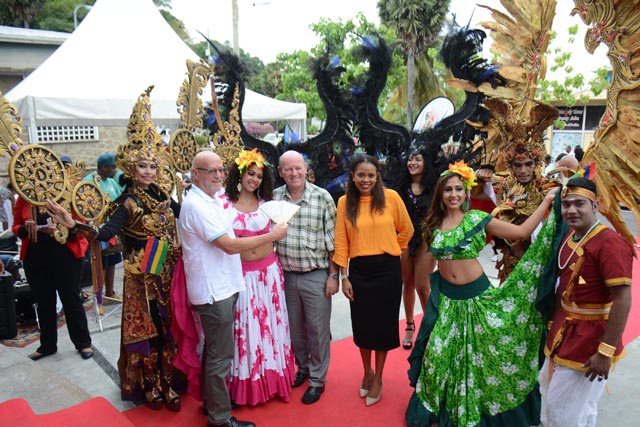 (Seychelles News Agency) - The Seychelles capital, Victoria, is buzzing with excitement. Decorations are up and colourful costumes are on the street as the annual Carnaval International de Victoria gets under way.

Some of the international delegations in the country gave a carnival performance at the Deepam Cinema in Victoria on Thursday evening.

Donato Sileo, who is attending his first carnival in Seychelles, has joined his Italian colleagues who have been here for past carnivals. He told SNA that he excited and looking forward to the parade.

“We are presenting Alice in Wonderland this year. I don’t know how it’s going to be in the sun with the costume I have on but I really like being here, I like the atmosphere,” said Sileo.

A total of 23 international delegations are taking part in the carnival this year.

Tiara Adinda Sari, one of the five members of the Jember Fashion Carnaval from Indonesia, is also coming for the first time and was attracting onlookers and photographers with her golden attires on Thursday.

“It’s amazing and we love to be here and am hoping to have an unforgettable moment,” said Sari.

While the Brazilian dancers and the Notting Hill Carnival from the UK with their majestic costumes are already familiar faces, newcomers to the 2016 carnival include a group from France and Cologne, Germany, joining another German delegation, Düsseldorf, that is making a fourth appearence this year.

Rolf Herpens from Düsseldorf explained to SNA that the two cities in the western region of Germany host their own carnival on the same days and that the Seychelles Carnival is giving them the unique opportunity to do something he says would be impossible back home.

“When we have our carnival we make visits to the different cities but there is always this little rivalry although it’s a joke. So it’s the first time a delegation from the Cologne Carnival and a delegation from Düsseldorf will be parading together,” Harpens said to SNA.

The Seychelles Tourism Minister, Alain St Ange, who initiated the Carnaval International de Victoria in 2011, says that as the sixth edition unfolds “the dream of uniting people through culture is becoming a reality.”

This was also echoed by the Tourism Board CEO, Sherin Naiken, during a news conference on Thursday to welcome the international delegations and journalists covering the event.

According to the STB over 100 journalists from across the world are in Seychelles for the cultural manifestation.

“It’s through your work that we are able to spread the message of the carnival across the world and every year if there’s one message we try to pass is the message of unity and the message of peace because it is through this carnival you see countries parading side by side,” Naiken said when addressing the journalists.

International media exposure gained through the three-day carnival for the last six years is something which St Ange says has also helped to increase tourism numbers.

“Last year we ended the year with a 19 percent increase in tourism numbers, this year we are already 11 percent above last year. There’s one thing that makes it work and that is visibility,” St Ange said in an interview with SNA.

“When the press from the US, China and across Europe converge to Seychelles for the Carnival they are attracted by an event that showcases cultural diversity and this increases Seychelles’ visibility which is important to stay relevant in the tourism industry,” he added.

The theme for the Carnaval International de Victoria this year is national unity, and compared to the five previous editions the 2016 Carnival will be taking a different route in the Seychelles Capital, Victoria. The new route will be also be drawing attention to some of the monuments in Victoria.

The annual carnival often dubbed the melting pot of cultures will be held over three days. While the official launching will be done Friday evening the main event is on Saturday.

Thousands Seychellois and visitors will converge along the streets of the capital where the 23 international delegations and 22 local floats this year will be parading to the sound of music wearing colourful costumes. The event is one that allows participants and onlookers to not only showcase cultures but to learn from each other’s cultural diversity.

Seychelles is partnering with the Indian Ocean island of Reunion which has been a co-host of the carnival from the start in 2011. South Africa has also come onboard as a co-host in 2016.

The weekend which organisers have promised to be three days of cultural manifestations will culminate with a kiddie carnival and prize presentation ceremony on Sunday.