No signs of trauma, suicide in Prince death: police 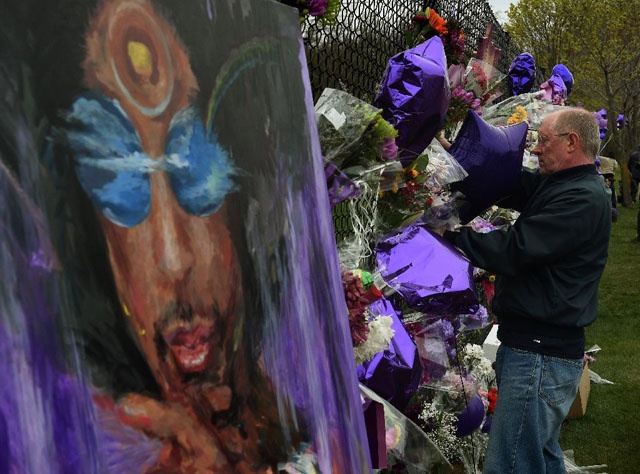 (AFP) - There was no evidence of trauma on Prince's body when he was found unresponsive in an elevator at his huge compound or any indication the late music icon committed suicide, US authorities said Friday.

Stunned fans massed outside the superstar's Paisley Park studio complex on the outskirts of Minneapolis are looking to an autopsy carried out earlier in the day to resolve the mystery around the sudden loss of their idol.

But medical officials cautioned it could be weeks before they can conclusively say what killed the enigmatic, award-winning musician, whose death at age 57 plunged the entertainment world into grief.

Prince was found dead on Thursday, a week after he was hospitalized for flu-like symptoms that he later downplayed. There have been reports the incident may have been triggered by an overdose of an opioid-based painkiller.

"We have no reason to believe at this point that this was a suicide," Carver County Sheriff Jim Olson told a packed news conference, stressing the investigation was ongoing.

Authorities plan to file a search warrant for Prince's vast studio complex in the coming days, though they stressed this was standard procedure.

The sheriff said there were "no obvious signs of trauma" or violence on Prince's body.

Prince was alone at the premises when he died, but Olson refused to comment on reports of painkiller use.

The Grammy and Oscar winner, who was inducted into the Rock and Roll Hall of Fame in 2004, was last seen alive on Wednesday evening by staff at the compound, but his body was only discovered the following morning.

The local medical examiner's office says preliminary autopsy results will take days and the results of a full toxicology scan could take weeks.

The medical examiner's office declined to comment on possible signs of drugs or a drug overdose in Prince's body.

Grieving fans around the world took to wearing purple -- Prince's signature color -- in his honor.

Those milling about outside his studio complex to pay their respects placed flowers and handwritten messages at the scene, which has become a place of pilgrimage.

"It's almost like a photo album, his music, that you just can recall all these great times."

The Canadian school bus driver said she cranked Prince up on the stereo for the kids when she drove them home after news broke of the singer's untimely death Thursday afternoon.

In turn, Prince's staff delivered 50 boxes of pizza to fans.

Many in Minneapolis said how proud they were of the city's native son, and how saddened they were by the thought he died alone, as well as by the suggestion his death could be linked to an overdose of painkillers.

"I'm sad that he died alone because he was such a people person," said Barb Ruhl, a 65-year-old retired administrative worker.

Cindy Legg, a 41-year-old nurse, said: "Hopefully it was just God needed him in heaven."

Entertainment website TMZ, citing unnamed sources, reported that Prince was treated last week for an overdose of Percocet after a show in Atlanta, when his private jet made an unscheduled landing in Moline, Illinois.

The report could not immediately be verified.

Small in stature but an electrifying live performer, Prince became an international sensation in the 1980s, fusing rock and R&B into a highly danceable funk mix.

The sudden loss of the "Purple Rain" legend, who was acclaimed for his instrumental wizardry and soaring falsetto, prompted an outpouring of tributes -- and spontaneous celebrations.

In New York, director Spike Lee led a Prince sing-along at a packed block party in Brooklyn, while in Minneapolis, where a bridge was lit up in purple in Prince's memory, the atmosphere was carnival-like with fans bursting into song.

"You know, he was the greatest artist of all time. There will never be another one like him," said Antonio Harper, one of thousands who partied through the night in Prince's hometown in a bittersweet farewell.

"I cried, I cried a few times all night," said Melody Johnson, part of the crowd at the First Avenue club, where Prince shot "Purple Rain," the rock musical featuring songs from the album of the same name.

"Queen of Soul" Aretha Franklin was one of many in the entertainment industry to honor the singer, describing him as "an original and a one-of-a-kind."

Rolling Stones frontman Mick Jagger called Prince "one of the most unique and talented artists of the last 30 years."

Prince -- whose huge catalogue of hits includes "1999," "Cream" and "Kiss" -- was prolific in his output, recently releasing albums through streaming site Tidal, and had taken to scheduling shows at the last minute to avoid scalpers.

President Barack Obama, who invited Prince to play a private White House show last year, let slip that he played some of his records Friday morning at the US ambassador's residence in London, where he was staying.

"It happens there's a turntable and so this morning, we played 'Purple Rain' and 'Delirious' just to get warmed up before we left the house," Obama told a joint press conference with British Prime Minister David Cameron.

"He was a great performer. And creative and original and full of energy. And so it's a remarkable loss."

General » Be a reporter: Write and send your article » Subscribe for news alert
Tags: Entertainment, Prince, US, music