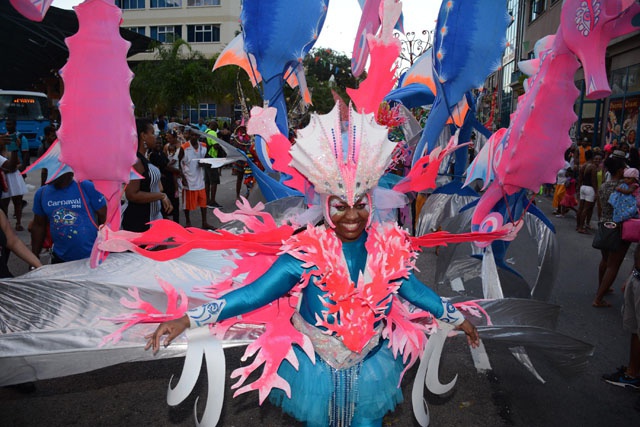 (Seychelles News Agency) - Carnival should be used as a platform to tell the story of a people, and this should be done in the best possible way.

That was the message relayed by the chief executive of the Notting Hill Carnival Roadshow Company on Sunday after the UK group won the best international float title at the Seychelles carnival.

Winners were named at the closing ceremony Sunday of the sixth edition of the Seychelles Carnaval International de Victoria at Freedom Square in the Seychelles capital, Victoria.

“We take the Seychelles carnival very seriously, simply because it is such a unique carnival,” said Holder.

“We put a lot of hard work into bringing the costumes, doing the designs to reflect Seychelles and to come here and display, so yes it is always a good feeling when you win,” she added.

With its 70 participants including some 30 locals dressed in costumes depicting six birds of the Seychelles and the Indian Ocean archipelago’s sea life, Notting Hill claimed the prize ahead of the group from Reunion island and Indonesia respectively.

Notting Hill has participated in all six editions of the Seychelles Carnaval International de Victoria since the event was launched in 2011.

Sunday’s win was the fifth for the UK carnival group. The only time Noting Hill did not take home the ‘Best international Float Title’ was in 2014 when a group from China won the prize.

Trophies and other prizes including cash rewards were presented to the winners, decided by a panel of judges in several categories on Sunday, as the three days of cultural manifestation came to a close.

Perseverance, a reclaimed island adjoined to the Seychelles main island, Mahé, where the country has the largest ongoing social housing project, clinched the title for best local float.

L’Union Estate, which has several old buildings, a running coconut oil mill and other cultural and historical aspects, is also a place where fruits, vegetables and vanilla are grown. It’s also the gateway to one of the most popular beaches on the island, Anse Source D’Argent.

Chantal Ghislain, member of the national assembly for the inner islands including La Digue, also a member of the committee that helped put together the island’s float, told SNA that mostly recycled materials were used to prepare their costumes.

“It’s the school students on the island who used papier-mâché to design the fruits and vegetable costumes. It was a way for them to do art but also learn about the cultural aspect of L’Union Estate,” said Ghislain.

“All the other elements used in our float were taken from there like the coconut, vanilla. Basically we took L’Union Estate from la Digue and brought it to Mahé,” she added.

South Korea and Zambia won the second and third prize in the best cultural float category.

The Seychelles Tourism Academy took home the prize for best school float, while China and India were rewarded for having put up an exceptional show during the carnival parade.

The three days of celebration culminated with a kiddie carnival on Sunday – a chance for the younger kids to show up dressed in colourful costumes depicting the Seychelles flowers, traditional games, the sea and its creatures.

La Retraite, a primary school in north Mahé with students displaying the theme of pirates took home the prize for the best kiddie float.

“Participating in the Seychelles carnival is a time of fraternity, unity and Indian Ocean cooperation,” Phillipe Mroimana from Reunion said on Sunday.

“I can see the international groups putting a lot more efforts into their floats but not so much when it comes to the local ones,” said Quatre.

The same views were echoed by Ghislain who told SNA that: “There is a need to sensitize the local participants on what to bring to the carnival that would really depict the Seychelles unique culture.”

Speaking to SNA at the closing ceremony and addressing suggestions that the carnival should possibly held on alternate years, the Tourism and Culture Minister Alain St Ange said the carnival is an event that should “remain on the calendar” in Seychelles for the “advertising possibility and visibility” gained through the international media that show up for the annual event.

In the midst of all the reminiscing about the already past carnival, Notting Hill is already thinking about its designs for the next edition.

“We’ve just come back from Praslin and there was so much inspiration for a theme next year for what we would like to design to bring back to Seychelles Carnival if we are invited,” said Holder.

Notting Hill which joined Brazil, China, Italy and Germany to give a taste of the carnival to islanders on Praslin, Seychelles second-most populated island, says it is important to motivate Seychellois designers to showcase their skills and talents if the Seychelles carnival wishes to stand on its own in future.