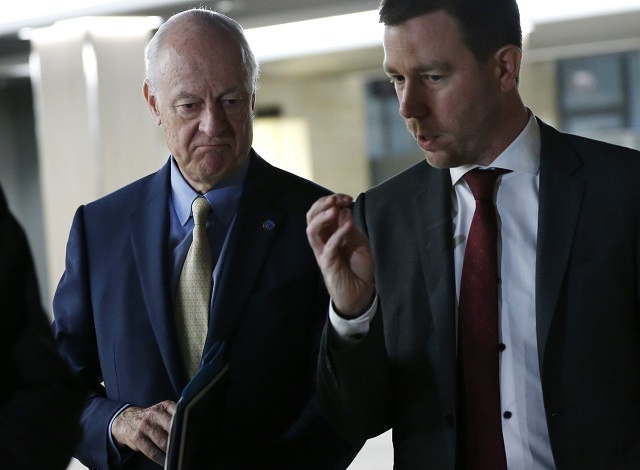 United Nations Syria envoy Staffan de Mistura (L) arrives for a meeting with the Syrian government delegation during Syria Peace talks at the United Nations in Geneva, on April 26, 2016. Syria's fragile ceasefire is in grave peril, US President Barack Obama and the UN's special envoy warned on April 22, 2016, as violence surged in the war-ravaged country's second city Aleppo. The truce "is still in effect, but it is in great trouble if we don't act quickly", the United Nations' top envoy for Syria, Staffan de Mistura, told reporters in Geneva, where he is mediating faltering peace talks.(DENIS BALIBOUSE / POOL / AFP)

(AFP) - The UN's Syria envoy said Thursday he planned to hold another round of peace talks next month, but called for a stuttering ceasefire to be "revitalised" before setting a date, as at least 20 civilians were killed in second city Aleppo.

Staffan de Mistura made the comments after briefing the United Nations Security Council on the talks, which he said had made gains despite escalating violence on the ground that continues to threaten the fragile truce.

He said the United States, which supports some rebel groups, and regime ally Russia needed to act, calling on them to organise a high-level Syria meeting before negotiations resume.

As the latest round of negotiations went on recess, de Mistura said he wanted to open a fresh set "during the course of May", to build on momentum gained so far.

But he added that he was waiting to fix a date in the hope that world powers would use their leverage to strengthen the ceasefire, which needed to be "urgently revitalised".

"How can you have substantial talks when you have only news about bombing and shelling?" de Mistura asked.

The announcement came after regime strikes on an Aleppo hospital and nearby residential building late Wednesday left at least 20 civilians dead, including two children, according to civil defence volunteers in the country.

A doctor who was the only paediatrician in the rebel-held eastern neighbourhoods of Aleppo was also among the dead, an AFP correspondent on the ground said.

In separate attacks on the east and west of the city earlier in the day, 16 people died, including at least five civilians, according to the Syrian Observatory for Human Rights and defence volunteers.

State news agency SANA blamed rocket attacks and gunfire in the west on Al-Qaeda affiliate Al-Nusra Front and its allies.

De Mistura highlighted that all parties at the Geneva-based talks now recognised the need for a new transitional government in Syria that should be tasked with drafting a new constitution, even if huge divides remain on the nature of that government.

The talks are focused on creating a transitional government capable of leading Syria out of a brutal civil war that has killed more than 270,000 people and displaced millions.

"No one is doubting any more that there is an urgent need for a true and credible political transition," he told reporters.

"There is a clear understanding that a political transition should be overseen by a new, I repeat new, credible and inclusive transitional government, which will be replacing the present governance arrangement," he said.

But the UN mediator declined to discuss the most daunting obstacle at the talks -- the fate of Syrian President Bashar al-Assad.

The main opposition High Negotiations Committee (HNC) has insisted that Assad cannot be part of a transitional government and must agree to leave power as part of any peace deal.

Government negotiators have said Assad's fate is not on the agenda at the talks.

The HNC, which is backed by Saudi Arabia and the West, officially withdrew from this round last week to protest escalating violence, but left technical experts in Geneva who continued to meet with UN mediators.

The group is "closely linked to terrorist organisations, primarily the Islamic State group and Al-Qaeda", Moscow's ambassador to the UN said.

But Alloush rejected the accusation and said Russia was committing "massacres" with its air and artillery strikes in support of Assad.