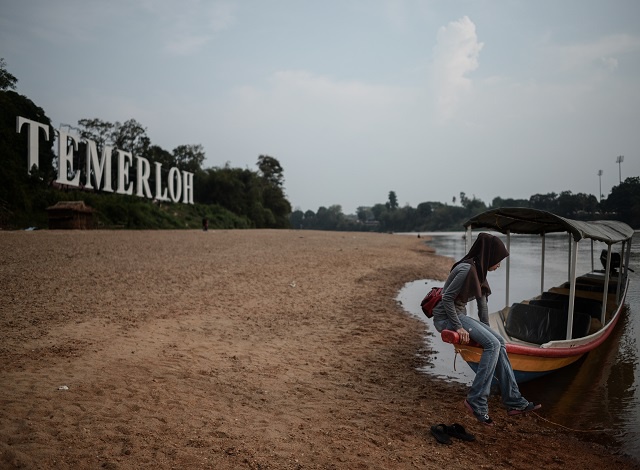 This picture taken on April 26, 2016 shows a Malaysian woman sitting on a boat moored on the banks of the Pahang river in Temerloh, outside Kuala Lumpur. In Malaysia, the extreme weather has shrunk reservoirs, dried up agricultural lands, forced water rationing in some areas, and caused repeated school closures as a health precaution. (MOHD RASFAN / AFP)

(AFP) - Withering drought and sizzling temperatures from El Nino have caused food and water shortages and ravaged farming across Asia, and experts warn of a double-whammy of possible flooding from its sibling, La Nina.

The current El Nino which began last year has been one of the strongest ever, leaving the Mekong River at its lowest level in decades, causing food-related unrest in the Philippines, and smothering vast regions in a months-long heat wave often topping 40 degrees Celsius (104 Fahrenheit).

The regional fever is expected to break by mid-year but fears are growing that an equally forceful La Nina will follow.

That could bring heavy rain to an already flood-prone region, exacerbating agricultural damage and leaving crops vulnerable to disease and pests.

"The situation could become even worse if a La Nina event -- which often follows an El Nino -- strikes towards the end of this year," Stephen O'Brien, UN under-secretary-general for humanitarian affairs and relief, said this week.

Wilhemina Pelegrina, a Greenpeace campaigner on agriculture, said La Nina could be "devastating" for Asia, bringing possible "flooding and landslides which can impact on food production."

El Nino is triggered by periodic oceanic warming in the eastern Pacific Ocean which can trigger drought in some regions, heavy rain in others.

Much of Asia has been punished by a bone-dry heat wave marked by record-high temperatures, threatening the livelihoods of countless millions.

- Millions left out to dry -

Vietnam, one of the world's top rice exporters, has been particularly hard-hit by its worst drought in a century.

In the economically vital Mekong Delta bread basket, the mighty river's vastly reduced flow has left up to 50 percent of arable land affected by salt-water intrusion that harms crops and can damage farmland, said Le Anh Tuan, a professor of climate change at Can Tho University.

More than 500,000 people are short of drinking water, while hotels, schools and hospitals are struggling to maintain clean-water supplies.

In Malaysia, the extreme weather has shrunk reservoirs, dried up agricultural lands, forced water rationing in some areas, and caused repeated school closures as a health precaution.

Fisherman Abdul Rafar Matarrh said his daily catch in central Malaysia's Pahang River has been decimated as the normally broad river has shrunk to a third its size, leaving dead fish to rot in the dry bed.

"Last year I could catch about 20 kilos (44 pounds) of fish a day. Now, to get one kilo is very hard," said Abdul Rafar, 80, after netting just one small fish in an entire morning under an unforgiving sun.

In India, about 330 million people are at risk from water shortages and crop damage, the government said recently, and blazing temperatures have been blamed for scores of heat-stroke deaths and dead livestock.

Authorities in Palau warned recently the tiny Pacific island nation could completely dry up soon in a "total water outage".

As a result, rice prices have risen this year but the UN's Food and Agriculture Organization and other experts say a major food crisis is not yet imminent as stocks remain ample.

But warning signs have already emerged -- two people were killed in early April in the drought-ravaged southern Philippines when police reportedly clashed with thousands of farmers protesting over food shortages.

"What tends to happen is that they (governments) talk about it in the immediate time there is a crisis and then one year later they forget about it and move on," he said, adding that "things will get worse."

"We must respond quickly to immediate, life-threatening needs, but we must also help people to become more self-reliant, and build individual and community capacity to respond to future shocks," he said.