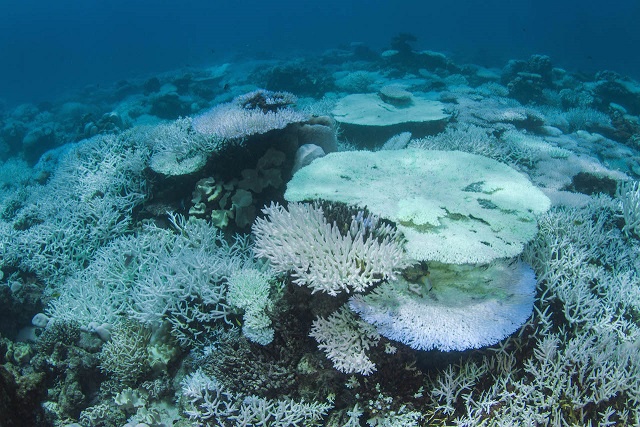 (Seychelles News Agency) - Bleaching of coral in the Seychelles archipelago has escalated the past two years, say officials from two non-governmental organisations.

In surveyed sites around Mahe, the most populated island, Global Vision International’s country director, Chris Mason-Parker, says as much as 90 percent of corals in shallow waters are now bleached significantly with signs of mortality.

Another organisation, Nature Seychelles, says extensive bleaching has been observed around Praslin, the second-most populated island, with over 17 percent of coral having died within the special reserve of Cousin, a neighbouring island.

Coral bleaching is a phenomenon where coral turns white or colours fade. It is caused by an increase in sea temperature. An El Niño similar to the one in 1998 has occurred this year, bringing above-average temperatures to the region.

The local media made a report last month on coral bleaching around Curieuse’ protected marine area, located 15 minutes from Praslin.

“Bleached corals continue to live, but growth is limited until they can regain the algae which give them their colour and food. This usually occurs when the temperature returns to normal,” said the chief executive of Nature Seychelles.

Given that it takes years for reefs to recover from such a phenomenon, Mason-Parker said this was an opportunity to identify resilient pockets of reef that may be critical for replenishing coral reefs in the Indian Ocean islands.

After the coral bleaching of 1998, coral transplantation is a well-established technique in Seychelles with several sites including Cousin and Curieuse being used as underwater coral nurseries.

Nature Seychelles implemented the largest coral reef restoration program in the region using more than 41,000 coral fragments which were grown in underwater nurseries for more than a year, off Praslin Island.

Over 34 species of corals were then transplanted to the Cousin Island Special Reserve in an area of 5,300 square meters, which was degraded by the 1998 bleaching incidence.

“We hope our transplanted corals exhibit the resilience needed to survive this episode,” said Shah, adding that this will establish proof of concept regarding the feasibility, and desirability of coral gardening.

Mason-Parker, on the other hand, highlighted the need to reduce stressors on local reefs such as avoiding overfishing, minimising nutrient loading and the use of chemical fertilizers and pesticides. He said that protection should be provided for those reefs that are exhibiting resilience and extending this protection to adjacent seagrass and mangrove ecosystems.

“These will maximise our chances of protecting coral reefs and build their resilience to climate change,” Mason-Parker added.