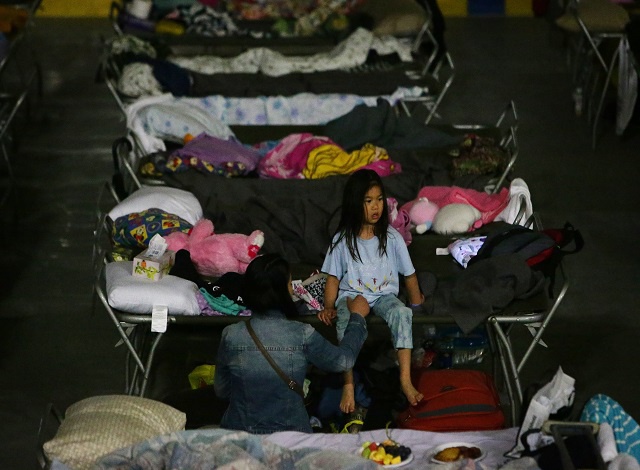 A young girl sits on a cot at a makeshift evacuee center in Lac la Biche, Alberta on May 5, 2016, after fleeing forest fires north of Fort McMurray. Raging wildfires pressed in on the Canadian oil city of Fort McMurray Thursday after more than 80,000 people were forced to flee, abandoning fire-gutted neighborhoods in a chaotic evacuation. No casualties have been reported from the monster blaze, which swept across Alberta's oil sands region driven by strong winds and hot, dry weather. (Cole Burston / AFP)

(AFP) - Canada on Thursday began airlifting to safety up to 25,000 people from the city of Fort McMurray forced from their homes by raging forest fires in Alberta's oil sands region.

The authorities ordered the oil city of 100,000 people to be evacuated after firefighters backed by air tankers and helicopters failed to prevent the monster blaze from engulfing entire neighborhoods.

Some 4,000 people who fled to the north of the city have been airlifted to Edmonton and Calgary, Alberta Premier Rachel Notley said, adding that the hope is to airlift 8,000 by the end of the day.

"Right now we are working with industry to do as much air evacuation as possible," she said.

"And we are doing everything we can to open the highways so we can get fuel up there and then get those folks moving south as quickly as we can."

The airlift, carried out with government and petroleum industry aircraft, began after evacuees who found refuge north of the city risked becoming trapped if shifting winds were to send the flames spreading toward them.

The government has declared a state of emergency in Alberta, a province the size of France that is home to one of the world's most prodigious oil industries.

More than 1,100 firefighters are battling 49 separate blazes across the province -- seven of them totally out of control.

The fires have engulfed 85,000 hectares (210,000 acres) of forest including 12,000 in the area surrounding Fort McMurray, now the epicenter of the inferno, where 2,000 homes have been destroyed.

Television footage from the center of the disaster zone showed trees ablaze on the edge of highways crowded with bumper-to-bumper traffic trying to leave as billowing black smoke darkened the sky. Bright orange embers whizzed through the air and floated down onto cars.

"The footage we've seen, the cars racing down highways while fire rages on all sides, is nothing short of terrifying," Prime Minister Justin Trudeau told lawmakers in Ottawa.

The Alberta government has sent a tanker under guard to help rescue vehicles stranded south of Fort McMurray, with three mobile fuel stations set up along a 200 kilometer stretch of road.

Thousands of evacuees thronged the tiny hamlet of Lac La Biche, about 300 kilometers south of Fort McMurray, after making a chaotic escape.

"There's no guide on how to get out of a forest fire," evacuee Alan Javierto told AFP, recounting a hurried, frightening evacuation as homes and businesses were reduced to cinders.

The flight from Fort McMurray began in earnest shortly before midnight Tuesday after a mandatory evacuation order.

Late Wednesday, fires forced the evacuation of Saprae Creek, a neighborhood east of the city's airport where even firefighters had to pull out.

As strong northwesterly winds whipped up the flames, three more communities to the south were evacuated, including Anzac, with police going door-to-door to make sure no residents were left behind.

Oil companies crucial to the region such as Suncor, Syncrude and Shell have pulled out non-essential employees, and set up emergency shelters in their huge bungalow worker communities.

All three major firms have slashed their output -- with Suncor shutting down its main production site north of Fort McMurray, and Shell Canada stopping production at its Albian site, with an output of 255,000 barrels per day.

Alberta has been left bone-dry after a period of unusually scant rainfall and unseasonably high temperatures.

Lawmaker Rona Ambrose, who represents the affected region, wept as she vowed in parliament that it would recover from the disaster.

"Fort McMurray is a place where Canadians have come from all across this country. It's a tough day for Albertans but we will persevere" she said through tears.

However, Notley said the tens of thousands evacuated from the city face a long wait to return home.

"I must be very, very direct about this," she said. "It is apparent that the damage to the community in Fort McMurray is extensive, and the city is not safe for residents at this time."

"I understand that the Albertans are scared, tired, and worried about their homes and what the future holds for themselves and their families," she added.

One particularly hard hit area was the Beacon Hill neighborhood some five kilometers from downtown Fort McMurray, where 70 percent of homes were in ruins. Even harder hit was the Waterways neighborhood, where nine in 10 homes have been reduced to charred remains.

Television footage showed the smoldering remains of a large motor home park, and the blackened carcasses of cars consumed by the flames.

"This kind of disaster will not be solved in a day or two, a week or two, or a month or two. We're all going to have to be here for the long haul."