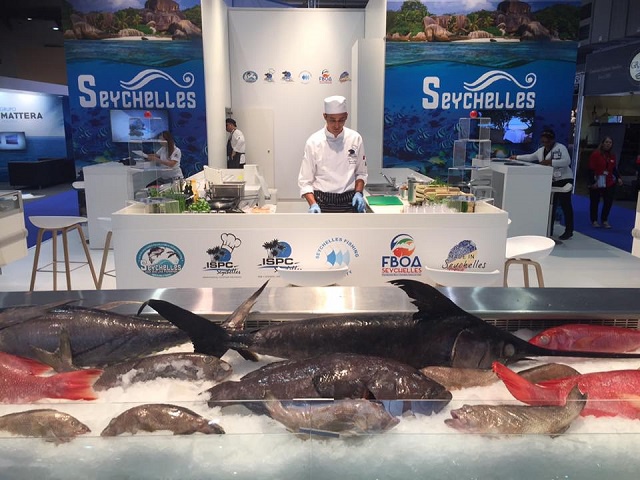 Some 30 processed fish products of the Seychelles based company ISPC were on display at the world’s largest seafood trade fair held in Brussels, Belgium last week. (ISPC)

The western Indian Ocean archipelago showcased some of its finest fish at the four-day Seafood Expo Global/Seafood Processing Global held from April 25 to 28.

“Seychelles was promoting its products which come from a non-polluted and remote destination, where we promote sustainable fishing by practicing hook and line fishing,” said ISPC’s head.

Fourcroy said this was well received by the visitors who showed a lot of interest in the different types of fresh fish on display.

The Seafood Expo Global is the largest seafood trade event in the world hosted annually in Belgium attended by over 26,000 buyers and suppliers together with other professionals from around 140 countries.

At the expo, ISPC displayed some 30 processed products including swordfish, smoked marlin, burgers, and Thai fish cake, produced, packed and presently being sold on the Seychelles market.

ISPC, a Victoria-based company established in 2006 dealing in fish products, was part of the Seychelles’ delegation.

Fishing is Seychelles’ second pillar of the economy and the country’s stand at the expo entitled ‘Fish of Seychelles’ was 86 metres square. Also on display were techniques used such as long line fishing and bottom fishing.

The Seafood Expo Global this year had 1,700 exhibits from around 17 countries.

The fair has evidently opened doors for ISPC with forms provided to visitors expressing interest in the products on display.

“We will now classify the forms according to the level of interest and start contacting potential commercial partners as of next week,” Fourcroy told SNA.

ISPC expects to get its exporting certificate later this year, and if everything goes according to plan, ISPC will join two other local companies which are exporting Seychelles’ finest fish, to all corners of the world.