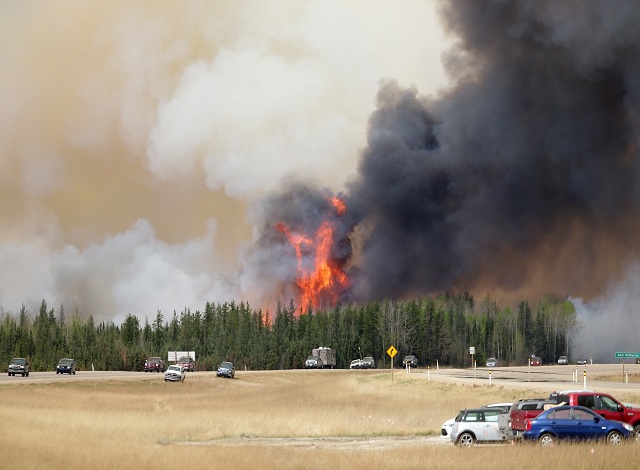 A convoy of evacuees drives south as flames and smoke rises along the highway near near Fort McMurray, Alberta on May 6, 2016. Canadian police led convoys of cars through the burning ghost town of Fort McMurray Friday in a risky operation to get people to safety far to the south.In the latest chapter of the drama triggered by monster fires in Alberta's oil sands region, the convoys of 50 cars at a time are driving through the city at about 50-60 kilometers per hour (30-40 miles per hour) TV footage showed. (Cole Burston / AFP)

(AFP) - The Alberta forest fire has forced Canadian oil producers to slash output by one million barrels a day, dealing a fresh blow to the oil-dependent economy, analysts said Friday.

The immense fire ravaging the area around Fort McMurray, the center of the country's massive oil sands deposits, has sent tens of thousands of workers and their families fleeing and compelled the producers in the region to shut down operations.

The production cuts correspond to about a quarter of the country's entire production, and a third of Alberta's, and mean a loss of tens of millions of dollars per day in income.

The fire disaster adds another blow to the economy after the crash in the price of oil, Canada's principal export.

"It is now estimated that up to one million barrels a day of Canadian production has been taken offline," said oil analyst Matt Smith of ClipperData.

An estimated 100,000 people have been evacuated from Fort McMurray, a city built up on the oil sands mining industry.

Suncor, which produces more than 400,000 barrels a day in the area, has closed its principal operations north of Fort McMurray.

Shell Canada, with 250,00 barrels a day of production in Albian, 95 kilometers (55 miles) north of Fort McMurray, has also shut production.

Mark Ward, the chief executive of Syncrude, said that the group had completely shut down operations north of the city.

"The safety of our people and facilities is our greatest priority as we deal with the devastating effects of the forest fires," he said in a statement.

"That's why Syncrude and all the oil sands operators in northern Alberta are safely reducing operations and staffing to minimum levels."

The forest fires have spread since the beginning of the week to surround the oil operations and Fort McMurray, a city of 100,000.

Rachel Notley, the Alberta premier, said Thursday that the infrastructure for the industry had not been destroyed. The industry will be well-positioned to restore production once the fire has been brought under control, she said.

Jackie Forrest, vice president of energy research at Arc Financial, told CBC television that she expected that production could be ramped up "fairly quickly."

"You have the facility and there's a lot of incentive to get the production back online," she said.

But the fire has destroyed office buildings and homes in and around the city, so many support businesses and services for the oil industry could be lost.

"Many people will not have jobs to go back to," said Forrest.