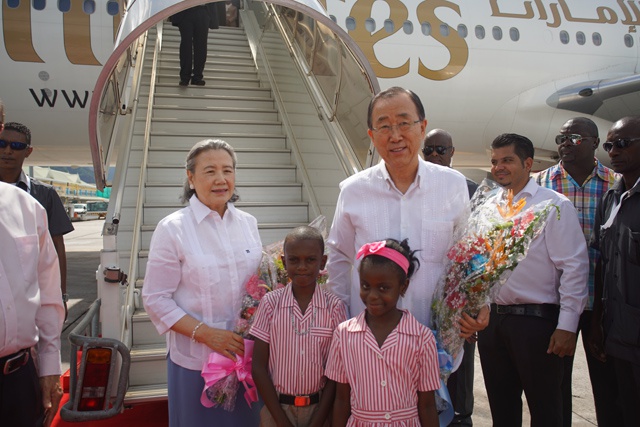 (Seychelles News Agency) - The United Nations Secretary-General Ban Ki-moon is in Seychelles at the invitation of President James Michel.

Ban was greeted by president Michel upon arrival at the Seychelles International airport at Pointe Larue on the east coast of the main island, Mahe, Saturday afternoon.

Shortly after, the UN Secretary-General was flown to Praslin Island for a visit to the UNESCO Heritage site of Vallee de Mai where grows the biggest nut in the world, the coco-de-mer.

Ban is the first Secretary-General of the United Nations to visit the Seychelles, a group of 115 islands in the western Indian Ocean, since the country joined the U.N. in September 1976.

During his two-day official visit, Ban is also scheduled to hold bilateral talks with the head of state on Saturday followed by a reception at State House.

Among the subjects for discussion is the issue of small island developing states, the blue economy and gender.

Ban Ki-moon's visit “is a powerful testimony to the exemplary and fruitful partnership between the Seychelles and the UN and its agencies, in developing political and socio-economic of the Seychelles over the years," said a statement from the president’s office earlier this week.