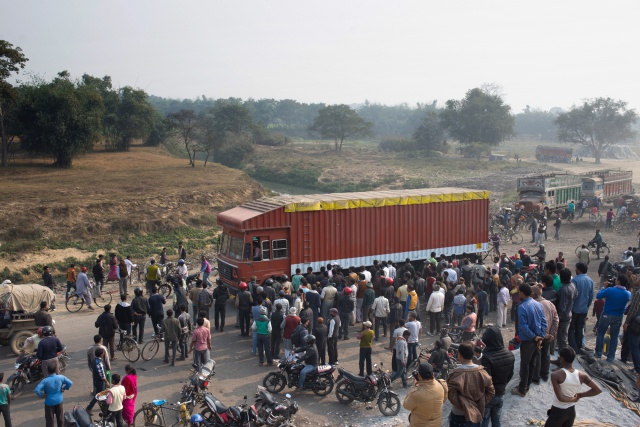 Nepalese and Indian bystanders look on as cargo trucks pass through the India-Nepal border at Birgunj, some 90kms south of Kathmandu. Cargo trucks drove through a border crossing in Nepal for the first time in months, police said, following a blockade that has caused a crippling shortage of fuel and vital supplies across the landlocked country. (AFP PHOTO/MANISH POUDEL)

(AFP) - Nepal has recalled its ambassador to India and cancelled an upcoming visit by its president to New Delhi, officials said Saturday, further straining ties between the two neighbours after months of tension.

Nepal's parliament was thrown into chaos last week after the Maoists threatened to pull out of the ruling coalition and dislodge the prime minister -- a move reportedly also backed by India. The Maoists later decided to continue supporting the government.

"He (Upadhyay) is close to Nepali Congress and seemed to play an internal role in the exercise to change the government, that was the main reason (for his recall)," an official source told AFP on condition of anonymity. Upadhyay was appointed by the former Nepali Congress-led government in April 2015.

A foreign affairs adviser to Prime Minister Oli did not give a specific reason for the envoy's recall.

"A government has the right to recall an envoy if he does not correctly represent the country, and the decision was taken accordingly," Gopal Khanal said.

It came as President Bidhya Devi Bhandari was forced to suspend her first official visit to India, scheduled to start Monday, after the Nepali government Friday failed to endorse the trip.

Nepal's relationship with India -- which is often accused of acting as a "big brother" to its smaller, impoverished neighbour -- has been strained since a months-long border blockade last year.

The blockade, by Nepal's Madhesi ethnic minority, came in protest at a new constitution which they said left them politically marginalised, with more than 50 people dying in clashes with police.

Kathmandu accused India of imposing an "unofficial blockade" on the landlocked nation in support of the Madhesis, who share close cultural, linguistic and family links with Indians across the border.

Prime Minister Oli visited India in February in a bid to smooth ties.

But Guna Raj Luitel, editor of the Nepali daily Nagarik, said the latest developments suggested relations between the two countries had not improved as much as previously thought.

"Nepal should be engaged with India to strengthen our ties right now, but recent developments show diplomatic immaturity on our part," he said.

The new constitution, the first drawn up by elected representatives, was meant to cement peace and bolster Nepal's transformation to a democratic republic after decades of political instability and a 10-year Maoist insurgency.

But ongoing discussions between the government and protesting parties over the charter have failed to yield an agreement.