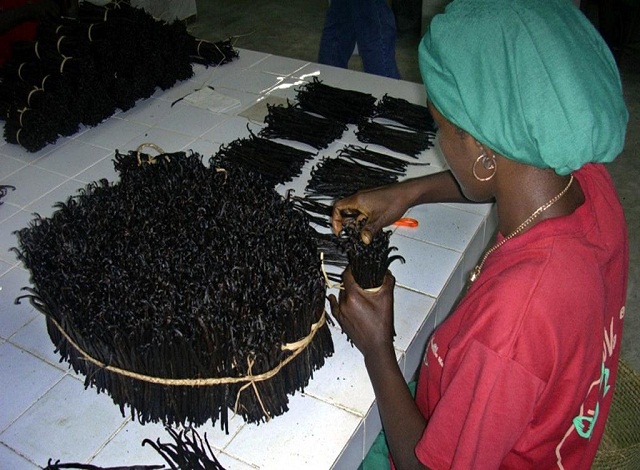 A worker sorts vanilla 12 October 2004 at a production site in Anjombalava, a village 36 kms away from Sambava, in the middle of the most important vanilla production regions in Madagascar. (AFP PHOTO / PATRICK MERCIER)

(AFP) - The sweet flavours of vanilla are taking on a bitter edge for buyers in Madagascar as prices have almost quadrupled but quality has declined, with experts blaming speculation, money laundering and a poor harvest.

In some local supermarkets, vanilla -- used in everything from ice cream to cakes -- has become so expensive that the pods have been removed from the spice aisle and placed close to the cash registers to deter thieves.

"The 2015 harvest was not excellent, about 1,200 tonnes compared to 1,800 the year before," Emmanuel Nee, head of the ingredients department at French spice trading company Touton, told AFP.

"But that doesn't justify the huge price jump we've seen this year," he added, instead blaming "extremely speculative" traders and an "irrational" market.

Dominique Rakotoson, head of a Madagascan family-operated vanilla company and one of the few people willing to talk on the record, pointed to large operators for stockpiling and hiking up prices.

Half of Madagascar's vanilla is exported to Europe, and a third to the United States -- but the island is not seeing the potential benefits of higher prices.

"Some buyers abroad have now cancelled or reduced their orders," said Rakotoson, while food production companies are turning to cheaper synthetic vanilla as an alternative.

All the while, the quality of Madagascar's crops have been slipping.

Many producers are harvesting the vanilla pods before they reach maturity, hoping to cash in on the high prices and also to pre-empt the theft of their increasingly valuable crops.

There has also been a spike in vacuum packing, bypassing a complex and months-long preparation process that dries out the pod and reveals the spice's sweet aroma.

By trapping the moisture in the pod, "vacuum packing interrupts the drying process, which compromises the quality of the vanilla," explained Landry Njaka, secretary of the National Vanilla Platform, the industry's trade association.

To catch up to export standards, the work has to be redone correctly, thus raising prices, said Nee.

The government recently banned vacuum packing in an effort to revive quality.

To mark the occasion, 500 kilos of prematurely-picked pods were burned.

The authorities have also announced they will dispatch special teams to prevent early harvesting and ward off thieves, though many are sceptical of how effective these measures will be.

Some Madagascans even speculate that the vanilla industry is being used as a front for the illegal trade in rosewood –- a sought-after product in China, where it is used to make furniture and musical instruments.

"It's in rosewood areas that we're seeing an overlap with vanilla price speculation," said Nee.

Madagascar, among the poorest countries in the world according to the World Bank, sorely needs the boost the vanilla price jump should bring.

Instead, potential competitors -- like Vietnam, India and Indonesia -- have now expressed interest in stepping into the market.

It takes a good five years for a plantation's first vanilla crop to be produced.

But in a country where the industry employs 200,000 and generated $192 million in exports last year, a spike in competition could be a heavy blow.