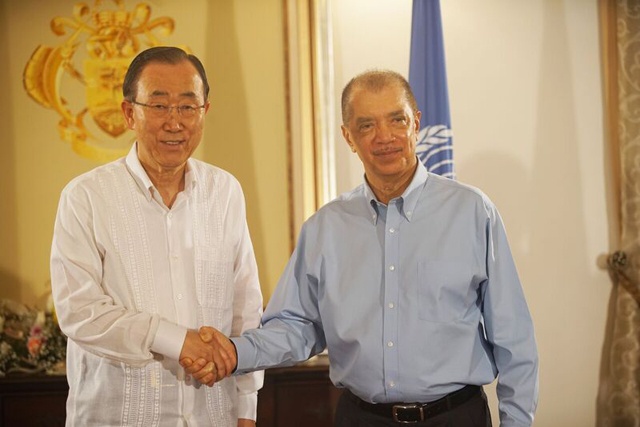 President Michel and Ban have agreed on a number of global issues including the seriousness and urgency of the threat posed by climate change. (Mervym Marie Seychelles News Agency)

(Seychelles News Agency) - United Nations Secretary-General Ban Ki-Moon commended Seychelles for its leadership role on issues of climate change, poverty, and insecurity during a visit to the island nation.

Speaking at a reception hosted by President James Michel at State House, Ban said he was impressed by the Seychelles’ sense of responsibility in the world.

“The problems we face as a planet – climate change, poverty, and insecurity – will only be solved through a global, multilateral response. I thank the government and people of the Seychelles for their leadership on these issues, and particularly for your early ratification of the Paris Agreement on Climate Change," said Ban.

The Seychelles’ head of state said that Ban and himself have agreed on the seriousness and urgency of the threat posed by climate change and on the need for a rapid implementation of the Paris Agreement by all parties concerned.

The United Nations Secretary-General arrived in Seychelles on Saturday on a two-day visit at the invitation of President Michel, and the two leaders held bilateral and multilateral talks on several global issues.

On the subject of piracy, Ban said that: “I am encouraged that since 2013 no commercial shipping vessels have been kidnapped by pirates -- this common solidarity and commitment to tackling transnational crime in this region while respecting international norms and human rights.”

Seychelles, an archipelago in the western Indian Ocean, has been at the forefront in the fight against piracy, a scourge that began to plague the Indian Ocean in 2005. The island nation became the chair of the Contact Group on piracy off the coast of Somalia in January 2016.

Ban also mentioned the high vulnerability of Seychelles to storm surges and referred to the recent devastating cyclone, Fantala, which wreaked havoc on Farquhar in April.

“Preventing and preparing for natural disasters in partnership with local and national governments will be one focus of the World Humanitarian Summit that I am convening in Istanbul (Turkey) on 23 and 24 May. I hope the Seychelles will bring its expertise to the table,” he said.

The Seychelles Head of State has reaffirmed the country’s engagement and commitment in the implementation of the landmark 2030 Agenda for Sustainable Development, which  is in its first year of implementation.

“I think that this is a common asset for the whole humanity and thank you for preserving all this very valuable treasure of humanity,” he said.

Ban added that Seychelles was in an excellent position to build on its record of protecting the environment, creating sustainable livelihoods and increasing the use of renewable energy.

He expressed the UN’s commitment towards Seychelles “to work with you for a better future on a cleaner planet”.

On Sunday, the UN Secretary-General will address the National Assembly in an Extraordinary Session, followed by a visit to the Supreme Court, the Seychelles Coast Guard Base and a tree planting activity at the Botanical Gardens.

Ban is the first UN Secretary General to visit Seychelles, and his visit coincides with Seychelles 40th Independence anniversary and since it became a member of the United Nations.