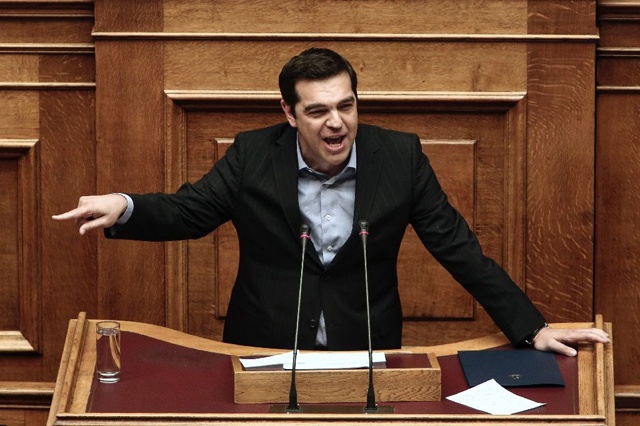 Greek Prime Minister Alexis Tsipras delivers a speech during a parliamentary session in Athens on May 8, 2016 (AFP Photo/Angelos Tzortzinis)

(AFP) - Greek lawmakers adopted a controversial package of pension cuts and tax hikes as eurozone finance ministers geared up for an emergency meeting Monday to hammer out fresh reforms for Athens to stave off another eurozone crisis.

The ministers are expected to complete a long-stalled first review of Greece's massive EU-IMF bailout and discuss new debt relief measures at the crunch meeting in Brussels, which follows mass public opposition to the newly adopted measures in the cash-strapped country.

The talks have already suffered months of delays and Greece wants to wrap them up as quickly as possible so that it can unlock the next tranche of its 86-billion-euro ($95 billion) bailout -- the third for the debt-laden country since 2010 -- ahead of a huge European Central Bank payment due in July.

In its official agenda the ministers from the 19 countries that use the euro -- the Eurogroup -- said they would discuss the "progress achieved" by Greek and creditor officials in recent days on the reforms, "with a view to conclude them as soon as possible".

It added that it would "also discuss possible debt relief measures aiming at ensuring that Greece's gross financing needs remain at a sustainable level, with a view to reach a political agreement."

The meeting follows days of protests in Greece, where tens of thousands took to the streets to slam the unpopular reforms adopted Sunday.

The measures were passed thanks to the Syriza-led government's slim majority in the 300-seat parliament, with the 153 MPs of the far-left Syriza and the Independent Greeks coalition voting in favour of the measures.

As expected all the opposition parties voted against the bill, which will reduce Greece's highest pension payouts, merge several pension funds, increase contributions and raise taxes for those on medium and high incomes.

In the run-up to the parliamentary debate, angry unions staged a general strike that paralysed public transport for a third straight day Sunday, while some 26,000 people took to the streets of Athens and Greece's second city Thessaloniki in protest at the pensions and tax overhaul.

Brief clashes erupted outside the parliament in Athens ahead of the vote, with youths throwing Molotov cocktails and flares at riot police who responded with volleys of tear gas, AFP reporters saw.

Numbers were, however, significantly down on February protests when 40,000 people marched in Athens alone.

"People are tired and disappointed by the leftist government in power... the rallies have not had the scale we had expected," said Maria, a private sector employee in her fifties who claims to be owed 30,000 euros ($34,000) in back pay from her employer.

Prime Minister Alexis Tsipras, who has said reform is needed to prevent the pension system collapsing in a few years, defended the changes in parliament earlier Sunday, which are part of the government's pledge to achieve 5.4 billion euros in spending cuts by 2018.

"The system requires root-and-branch reform that previous governments have not dared to undertake," he told lawmakers.

He also highlighted the fact that the Eurogroup meeting Monday will for the first time look at easing Greece's crippling debt burden, one of the only concessions granted to Tsipras when he secured the bailout.

"Tomorrow is a very important day. After six years (of crisis), the Eurogroup will meet to discuss debt relief," he said.

Ahead of the Brussels meeting, differences between the creditors themselves have emerged over extra reforms demanded by the IMF that could amount to another 3.6 billion euros of cuts by Greece.

IMF chief Christine Lagarde has warned that there were "significant gaps" in Greece's reform offers, while European Commission head Jean-Claude Juncker said Athens had "basically achieved" the objective of the measures required by creditors.

Greek Finance Minister Euclid Tsakalotos has called on the eurozone to back the reforms, warning of a "failed state" if the Brussels talks run aground.